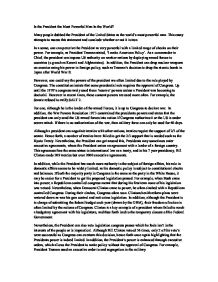 Is the President the Most Powerful Man In the World?

Is the President the Most Powerful Man In the World? Many people dubbed the President of the United States as the world's most powerful man. This essay attempts to assess this statement and conclude whether or not it is true. In a sense, one can perceive the President as very powerful with a limited range of checks on their power. For example, as President Truman stated, 'I make American Policy'. As a commander in Chief, the president can impose US authority on weaker nations by deploying armed forces to countries (e.g such as Kuwait and Afghanistan). In addition, the President can drop nuclear weapons on enemies using his power in foreign policy, such as Truman's decision to drop the atomic bomb in Japan after World War II. However, one could say the powers of the president are often limited due to the role played by Congress. The constitution insists that some presdential acts requires the approval of Congress. Up until the 1970's congress rarely used these 'reserve' powers unless a President was becoming to doctorial. ...read more.

Nevertheless, when Democrat Clinton came to power, he often clashed with a Republican controlled Congress. During their clashes, Congress often won. Clintons health reform plans were watered down as was his gun control and anti-crime legislation. In addition, although the President is in charge of submitting the federal budget each year (drawn by the OBM), their freedom of action is often limited by the actions of Congress. Clinton is a key example of a president whom failed to reach a budgetary agreement with his legislature, and thus forth lead to the temporary closure of the Federal Government. Nevertheless, the President can also veto legislation congress passes which he feels isn't in the interests of the people or is impractical. Although Bill Clinton vetoed 36 times, only 2 of his veto's were successful as Congress can overturn this decision, hence forth once again highlighting that the Presidents power is indeed limited. In addition, the President's power is enhanced through executive orders, which allows the President to make policy without the approval of Congress. ...read more.

In conclusion, many foreigners see the president as the most powerful man on the earth. This is due to the fact he plays a leading role in American foreign policy and Military affairs, and the fact the US is the mightiest country. From a domestic viewpoint, this is very different. Congress have an equal authority of domestic affairs as the President and the President faces more constrains on his power when making policy at home, and if they're clashes over domestic policy Congress usually triumphs. Therefore, it is fair to sometimes claim that there are two presidencies, one whom can command great armies, impose American authority on weaker nations, distribute large sums of foreign aid to countries in distress (.e.g Ethiopia) and can press a single button that can result in nuclear attack. The other is a president whom is concerned with domestic policy and often faces an uncooperative congress, and struggles with immense financial constraints and has to deal with volatile public opinion. Hence forth, although the president may be perceived as the most powerful man on the earth by foreigners, within the USA he has very little powers. Presidents Only Have the Power to Persuade ...read more.