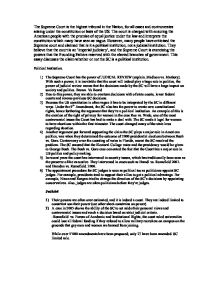 Is the Supreme Court a Political or Judical institution?

The Supreme Court is the highest tribunal in the Nation, for all cases and controversies arising under the constitution or laws of the US. The court is charged with ensuring the American people with the promise of equal justice under the law and interprets the constitution which many have seen as vague. However, many people have criticised the Supreme court and claimed that is it a political institution, not a judicial institution. They believe that the court is an 'imperial judiciary', and the Supreme Court is exercising the powers that the Founding Fathers reserved with the elected branches of government. This essay discusses the claim whether or not the SC is a political institution. Political Institution. ...read more.

Under the 9th Amendment, the SC also has the power to create new constitutional rights, hence furthering the argument that they're a political institution. An example of this is the creation of the right of privacy for women in the case Roe vs. Wade, one of the most controversial issues the Court has had to make a deal with. The SC made it legal for women to have abortions within the first trimester. The court changed many of the state laws regarding abortion. 4) Another argument put forward supporting the claim the SC plays a major role in American politics, was when they determined the outcome of 2000 presidential elections between Bush vs. Gore. Controversy over the counting of votes in Florida, meant the SC resolved the problem. ...read more.

For example, Nixon and Reagan tried to change the direction of the SC's decisions by appointing conservatives. Also, judges are often politicians before they're judges. Judicial 1) Their powers are often over estimated, and it is indeed a court. They are indeed limited to constraint son their power (see other sheet-constrains on power). 2) A case in 2005 shows the ability of the SC to set aside their personal views and controversial issues and reach a decision based on strict judicial criteria. -Rumsfield vs. Forum of Academic and Institutional Rights, the court ruled universities could lose all federal funding if they refused to allow military recruiters on campus on the grounds that gay men and women are banned from joining. While over 5'000 amendments have been proposed; only 27 have been amended. SC limited role. ...read more.