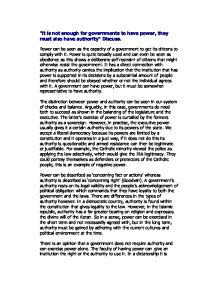 It is not enough for governments to have power, they must also have authority

"it is not enough for governments to have power, they must also have authority" Discuss. Power can be seen as the capacity of a government to get its citizens to comply with it. Power is quite broadly used and can even be seen as obedience as this shows a deliberate self restraint of citizens that might otherwise resist the government. It has a direct connection with authority as authority carries the implication that the institution that has power is supported in its decisions by a substantial amount of people and therefore should be obeyed whether or not the individual agrees with it. A government can have power, but it must be somewhat representative to have authority. The distinction between power and authority can be seen in our system of checks and balance. Arguably, in this case, governments do need both to succeed as shown in the balancing of the legislature and the executive. The latter's exercise of power is curtailed by the formers authority as a sovereign. ...read more.

Even though the stable political systems of the American and English institutions are legitimatised by authority, the emergency powers of the president in the American system and his ability to veto, which are not representative powers, show that there are still cases where power proves its ability without authority. This is similar to the non-consultation to the cabinet in British politics, the prime minister has the power to do this as leader of his government, but he is diminishing his authority if his party become disillusioned. John Major had a split party and lacked both power and authority but it was arguable that it was his small majority and bad leadership skills that made him lack authority; he still had the same power as previous prime ministers but could not implement the same changes that they could. Negative power also proves that Prime Ministers can exercise power without the authority to do so. In the run up to the '97 election, the Prime Minister put in a commission for electoral reform. ...read more.

However, elected politicians are more accountable for their actions than appointed ministers and in this way have a limited role as to what is acceptable and arguably have less authority than the appointed ministers. In conclusion I would argue that authority and power are interlinked abstract concepts that have a heavy dependence on the political culture at the time and the stability of the government. Having power itself generates authority in many cases or the image of authority, which is often enough to operate under without experiencing a backlash. The legitimacy of power comes from whether it is representative of the majority wish and whether it adheres to the contemporary situation, for instance, authority may be given for a government to act more extremely when an event has allowed them to do so. In this way, I think that although you can have power without authority, this power will only be able to be exercised in the short term, in the long term it is necessary to have authority to exercise power, as this makes it legitimate and prevents an eventual uprising or overthrowing of the government. ...read more.