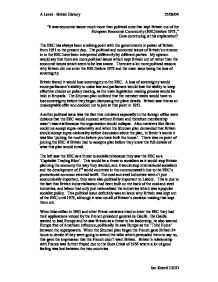 &quot;It was economic issues much more than political ones that kept Britain out of the European Economic Community (EEC) before 1973,&quot; How convincing is this explanation?

"It was economic issues much more than political ones that kept Britain out of the European Economic Community (EEC) before 1973," How convincing is this explanation? The EEC has always been a talking point with the governments in power of Britain from 1951 to the present day. The political and economic issues of Britain's entrance in to the EEC have been interpreted differently by different parties. My opinion would say that there are more political issues which kept Britain out of rather than the economic issues which seem to be less scarce. There are a lot more political reasons why Britain did not enter the EEC before 1973 and the main issue being the loss of sovereignty. Britain feared it would lose sovereignty to the EEC. A loss of sovereignty would erode parliament's ability to make law and parliament would lose the ability to keep effective checks on policy making, as the main legislation making process would be held in Brussels. The Shuman plan outlined that the member states would have to lose sovereignty before they began discussing the plans details. ...read more.

This is due to the fact that British industrialisation had been built on the back of the coal and steel industries, and labour had only just nationalised the industries which was a popular socialist policy. This political issue definitely was an issue why Britain was kept out of the EEC until 1973, although it was not all of Britain's decision making that kept them out. When Macmillan in 1961 and other Prime ministers tried to enter the EEC they had their applications vetoed by the French president general de Gaulle. De Gaulle wanted to lead Europe and he saw Britain as a threat to his leadership, he also wanted Europe free of American influence, politically he saw Europe as the 'Third Force' between the superpowers. When the Shuman plan began the French gave Britain 24 hours to decide if they were going to attend the talks which persuaded them to say no, this gave the impression that the French didn't want Britain. Britain's relationship with France was further frayed due to the Suez Crisis of 1956 where a lot of good feeling was lost between the two countries. ...read more.

As well as the political issues which I have outlined there were also economic reasons why Britain didn't join the EEC before 1973. Firstly Britain had the strongest industry at the time. Foreign Secretary Herbert Morrison told the cabinet that 'the Durham miners won't wear it'. Any country with the strongest coal and steel industries would have the same view that they would want to share it with less prosperous countries. Linking in to my last point, The European economy was also very weak; Britain thought that it would have a detrimental effect and would bring the British economy down to the European level. In conclusion I believe that it was political issues more than economic issues that kept Britain out of Europe for over 20 years. Although the political decisions do lead on to create some of the economic issues the political issues are a lot more important. The two key issues are sovereignty and the idea of a capitalist Europe. These issues had a knock on effect and meant that Britain was never totally committed to Europe and consequently any applications over 10 years were vetoed by General de Gaulle. A Level - British History 27/09/04 Ian Keevil 13HD ...read more.