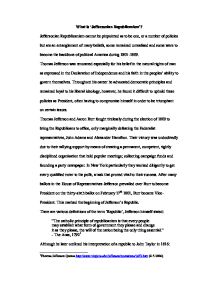 What is 'Jeffersonian Republicanism'? Jeffersonian Republicanism cannot be pinpointed as to be one, or a number of policies but are an entanglement of many beliefs, some remained unrealised and some were to become the backbone of political America during 1801-1809. Thomas Jefferson was renowned especially for his belief in the natural rights of man as expressed in the Declaration of Independence and his faith in the peoples' ability to govern themselves. Throughout his career he advocated democratic principles and remained loyal to his liberal ideology, however, he found it difficult to uphold these policies as President, often having to compromise himself in order to be triumphant on certain issues. Thomas Jefferson and Aaron Burr fought tirelessly during the election of 1800 to bring the Republicans to office, only marginally defeating the Federalist representatives, John Adams and Alexander Hamilton. Their victory was undoubtedly due to their rallying support by means of creating a permanent, competent, tightly disciplined organisation that held popular meetings; collecting campaign funds and founding a party newspaper. In New York particularly they worked diligently to get every qualified voter to the polls, a task that proved vital to their success. After many ballots in the House of Representatives Jefferson prevailed over Burr to become President on the thirty-sixth ballot on February 17th 1801, Burr became Vice- President. ...read more.

This caused Jefferson again to struggle to uphold his policy of improving state rights and removing power from federal government. As a result of the famous Marbury v. Madison case (1803) the notion of 'judicial review' was created, as Chief Justice John Marshall ruled that the Judiciary Act of 1789 was unconstitutional. This led to the Supreme Court having the final word on interpreting the constitution. Jefferson attempted to allocate this power to the states in his Kentucky Resolutions but failed due to Marshall's ruling. The Louisiana Purchase (1803) was the greatest Republican triumph under Jefferson but was also a contradiction of his principles. When Jefferson learned of Spain's intention to cede Louisiana back to France he felt he must act quickly to avoid conflict with Napoleon. He feared that if this happened he would be forced into an alliance with Britain, which would violate his anti-entanglement policy. Rather than take this risk Jefferson sent Monroe to Paris to offer Napoleon $10 million in exchange for New Orleans and West Florida, or if the French refused to sell, at least for a perpetual guarantee of the use, by Americans, of the Mississippi. If both failed Monroe was instructed to approach England for a defensive alliance. Sir Winston Churchill believed Napoleon's unexpected decision to sell to the whole of Louisiana to America was due to the loss of thirty thousand men during the French Expedition to Haiti. ...read more.

As a result of this British warships established a blockade of the American coastline seizing large numbers of American vessels. In 1806 Napoleon's Berlin Decree closed the continent to vessels that had called at a British port. Between Britain and France hundreds of American vessels and merchantmen were confiscated. Neither country had any regard for American rights. The actions taken by the British were offensive as their sea powers extended beyond European ports; they also impressed 'British' born sailors and refused to acknowledge naturalization. In 1807 the British frigate Leopard fired upon the American warship Chesapeake, boarded her and impressed four alleged deserters. Jefferson retaliated with 'peaceable coercion' rather than war so he passed the Nonimportation Act of 1806 and the Embargo Act of 1807. Jefferson achieved his goal but at great economic cost; land values fell, farm prices collapsed and bankruptcies multiplied. According to Jones, citizens felt '..that it sacrificed their interests for a utopian purpose and.. believed it to be unconstitutional.'6 The embargo Act caused widespread discontent and no doubt aided the resurgence of the Federalist in the 1808 election. In 1809 Jefferson was replaced but many of his policies remained in place, as many do even to this day. Jeffersonian Republicanism in its purest form is evident during the commencement of his first term but gradually it became something quite different, as it was recognized during the eight years he was in office. ...read more.