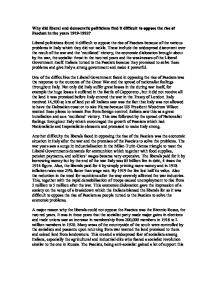 Why did liberal and democratic politicians find it difficult to oppose the rise of Fascism in the years 1919-1922? Liberal politicians found it difficult to oppose the rise of Fascism because of the various problems in Italy which they did not tackle. These include the widespread discontent over the result of the war and the 'mutilated' victory, the economic dislocation brought about by the war, the socialist threat in the two red years and the weaknesses of the Liberal Government itself. Italians turned to the Fascists because they promised to solve these problems and give Italy a strong government and make it powerful. One of the difficulties the Liberal Government faced in opposing the rise of Fascism was the response to the outcome of the Great War and the spread of nationalist feelings throughout Italy. Not only did Italy suffer great losses in the during war itself, for example the huge losses it suffered in the Battle of Capporetto , but it did not receive all the land it was promised before Italy entered the war in the Treaty of London. ...read more.

The liberals paid for it by borrowing money but by the end of the war Italy was 85 billion lire in debt, 4 times the 1914 figure. Also, the liberals paid for it by simply printing more money and in 1918 inflation rates rose 25% faster than wage rate. By 1919 the lire lost half its value. Also the reduction in the need for munitions after the way severely affected the war industries. This, together with the rapid demobilisation of troops caused unemployment to rise from 2 million to 5 million after the war. This economic dislocation gave the impression of a society on the verge of a breakdown which the Italians blamed the liberals for so it was difficult to oppose the rise of Fascism as people turned to the Fascists to solve the economic problems. A major reason why the liberals could not oppose the Fascists was the Biennio Rosso, the two red years. ...read more.

Parties opposed each other and the coalition system was not working because parties argued over how to act and so nothing got done. This was followed by the introduction of proportional representation in 1919 and universal male suffrage in 1918. In addition, the liberals did not do much to curb opposition. This is highlighted by the fact that when D'Annunzio seized Fiume with 2000 loyal nationalists the government did nothing until December 1920 and that too because of Giolliti's new government. The liberals themselves were weak and found it hard to oppose the rise of Fascism as the Fascists promised a stronger government. To conclude, the liberals and democrats found it difficult to stop the rise of Fascism because of the discontent over the war, the economic dislocation brought by it, the fear of socialism, and the weaknesses of the liberal government itself. The Fascists simple promised to solve the problems and offered a stronger government. The main reason why the liberals found it therefore is the fact that the liberals themselves were too weak to solve anything so the Italians chose the stronger Fascists. ...read more.