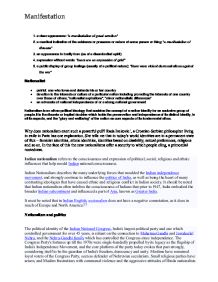 Nationalism as applied to business

Manifestation 1. a clear appearance: "a manifestation of great emotion" 2. a manifest indication of the existence or presence or nature of some person or thing: "a manifestation of disease" 3. an appearance in bodily form (as of a disembodied spirit) 4. expression without words: "tears are an expression of grief" 5. a public display of group feelings (usually of a political nature): "there were violent demonstrations against the war" Nationalist * patriot: one who loves and defends his or her country * devotion to the interests or culture of a particular nation including promoting the interests of one country over those of others; "nationalist aspirations"; "minor nationalistic differences" * an advocate of national independence of or a strong national government Nationalism is an ethno-political ideology that sustains the concept of a nation-identity for an exclusive group of people.It is the discrete or implied doctrine which holds the preservation and independence of its distinct identity, in all its aspects, and the "glory and wellbeing" of the nation as core aspects of its fundamental ethos. Why does nationalism exert such a powerful pull? Rada Ivekovic�, a Croatian-Serbian philosopher living in exile in Paris has one explanation. She tells me that in today's world identities are in a permanent state of flux - feminist identities, ethnic identities, identities based on disability, sexual preferences, religions and so on. In the face of this the new nationalisms offer a security to which people cling, a primordial rootedness. Indian nationalism refers to the consciousness and expression of political, social, religious and ethnic influences that help mould Indian national consciousness. Indian Nationalism describes the many underlying forces that moulded the Indian independence movement, and strongly continue to influence the politics of India, as well as being the heart of many contrasting ideologies that have caused ethnic and religious conflict in Indian society. It should be noted that Indian nationalism often imbibes the consciousness of Indians that prior to 1947, India embodied the broader Indian subcontinent and influenced a part of Asia, known as Greater India. ...read more.

Early in the course, the attendees were placed into one of 5 study groups - these groups were carefully chosen to draw upon the diverse skills of the participants. The overall task of these study groups was to draw upon the course material and their own experiences and propose a set of recommendations for genomics and biotechnology policy in India. The groups met frequently to discuss the presentations, and each participant was also provided with course reading material and additional background-reading on each session's topic. While it was generally agreed that the country's biotechnology industry has made huge strides over the last ten years and that genomics has the potential to alleviate India's health problems, the course participants also emphasized the importance of appropriate regulatory systems, intellectual property rights and ethical and social issues related to genomics and public health. A number of recommendations emerged over the course of the discussions. Recommendations * Increase funding for healthcare research with appropriate emphasis on genomics * Leverage India's assets such as traditional knowledge and genomic diversity in consultation with knowledge-holders and indigenous communities * Prioritize strategic entry points for India * Improve industry-academic interface with appropriate incentives to deliver knowledge, products and services to improve public health and the nation's wealth * Develop independent, accountable, transparent regulatory systems to ensure that ethical, legal and social issues are addressed for a single entry, smart and effective system * Engage the public and ensure broad-based input into policy setting * Ensure equitable access of poor to genomics products and services Action Item: Opinion Leaders' Network The course attendees agreed for the need for an opinion leaders' network that will serve as a forum to discuss the issues mentioned above and arrive at some policy decisions, and perhaps allow for policy papers that can be presented to the Government of India for further action. The internet-based network will be moderated in order to streamline discussions. ...read more.

That's right: It appears that offshoring has arrived. Although the terms "offshoring" and "outsourcing" are often used interchangeably, they are not the same. Offshoring typically describes what happens when a company runs its own facility abroad. Outsourcing describes when a company uses another firm to work as a contractor. Life science is already a global industry. Large pharmaceutical companies have offices on practically every shore, and researchers from both hemispheres frequently collaborate. However, as the pharmaceutical industry faces unprecedented cost pressures, experts believe that R&D and other fields in life science that previously stayed close to company headquarters are starting to move to lower-cost countries. And areas that have already begun moving offshore, such as clinical trials management and manufacturing, will increasingly do so. Countries such as China and India that have proven themselves in the IT world are now working harder than ever to improve their science training, protect intellectual property rights, and establish facilities that pass muster for US and EU regulators. India, for one, has an estimated 20,000 pharma companies. Already, chances are that if you had a recent MRI scan done in the United States, an India-based doctor read the results and sent them to your physician. "You can be sure it's happening, and it's going to increase, like it has in other industries," says Glenn Rice, founder and CEO of Bridge Pharmaceuticals, a Menlo Park, Calif. company that helps US and EU organizations develop drugs in Asia. This begs the question: How will life science offshoring affect jobs in traditional biotech hot spots? Experts offer a wide range of predictions, and some argue that the move could actually create jobs for US and EU life scientists by allowing companies to investigate more drugs at a cheaper cost. It's still unclear how offshoring might affect life scientists, but everyone agrees that it's time to start figuring it out. For now, forecasters still have "no idea how big or how bad" offshoring will be for the life sciences, says Norman C. Saunders of the Office of Occupational Statistics and Employment Projections at the US Bureau of Labor Statistics (BLS). ...read more.