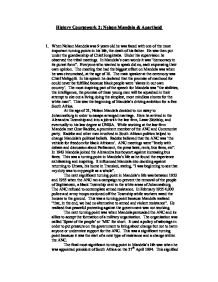 History Coursework 2: Nelson Mandela & Apartheid 1. When Nelson Mandela was 9 years old he was faced with one of the most important turning points in his life, the death of his father. He was then put under the guardianship of Chief Jongintaba. Under his supervision he observed the tribal meetings. In Mandela's own words it was "democracy in its purest form". Everyone who wanted to speak did so, each expressing their own opinion. The meeting that had the biggest effect on Mandela was when he was circumcised, at the age of 16. The main speaker at the ceremony was Chief Meligqili. In his speech he declared that the promise of manhood for could never be fulfilled because black people were 'slaves in our own country'. The most inspiring part of the speech for Mandela was "the abilities, the intelligence, the promise of these young men will be squashed in their attempt to eke out a living doing the simplest, most mindless chores for the white man". This was the beginning of Mandela's driving ambition for a free South Africa. At the age of 21, Nelson Mandela decided to run away to Johannesburg in order to escape arranged marriage. Here he arrived in the Alexandra Township and into a job with the law firm, Lazar Sidelsky, and eventually to his law degree at UNISA. ...read more.

The Commonwealth and European Community also imposed various other sanctions on South Africa. As a result of the sanctions, the government no longer had the money to support PW Botha's plans for 'Total Reform'. The sanctions were also having an effect on the morale of white South Africans. They felt disliked throughout the world; they wanted their national pride restored. The sanctions meant that Pretoria had less money to spend on keeping the whites in their luxurious lifestyles. The consequences of the Rubicon speech on the economy were finally beginning to show an end to the possible future of apartheid. Despite the imposed sanctions, South African businessmen were finding ways to get passed the trading sanctions. Trade dropped initially while exporters looked for new markets. Once they had found the new markets, export volumes in South Africa rose by 26% between 1985 and 1989. Disinvesting companies within South Africa simply sold off their assets cheaply to the local white businessmen. Sporting and Cultural boycotts also affected the country as it was damaged the morale of South Africans. South Africa was first suspended and later expelled from the International Olympic Committee. Protestors against apartheid disrupted the last South African Springboks tour of the UK. These restrictions caused white South Africans to realise just how isolated they had become due to apartheid. ...read more.

After the government said nothing about the Boipatong massacre of 46 ANC members by members of the Inkatha party on the 17th of June 1992, the ANC suspended direct dealings with the governments. FW de Klerk responded by announcing that if the ANC made South Africa ungovernable, the government might have to respond with unpleasant means. On 3rd of June 1993 CODESA set the date for South Africa's first national, non-racial general election. The ANC won the election and it was signified as the end of apartheid and minority rule. FW de Klerk played an important role in bringing about the end of apartheid. On February 2nd 1990 de Klerk announced to Parliament the intention to dismantle the apartheid system and begin negotiations. He then went on to release Mandela from jail and allowed the talks with Mandela and the ANC to progress further than the previous president PW Botha had. FW de Klerk and Mandela met on 26th of September 1992 and signed the 'Record of Understanding' in order to resume negotiations following the deaths of 29 ANC members during the protest march on Bisho. In conclusion, Mandela played a more pivotal role in bringing about the end of apartheid. He had been playing a part in the anti-apartheid movement before FW de Klerk was made president. However FW de Klerk helped the negotiations between the National party and the ANC progress and helped to bring about the end of minority rule. ...read more.