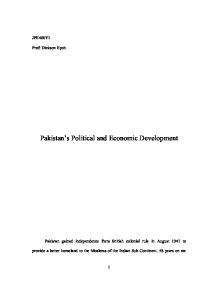 JPE400Y1 Prof: Dickson Eyoh Pakistan's Political and Economic Development Pakistan gained independence from British colonial rule in August 1947 to provide a better homeland to the Moslems of the Indian Sub Continent. 58 years on we have yet to see this country fulfill any of these promises. What Pakistan has witnessed is growing disparity between class structures, internal contradictions and a power struggle between the political elites and the military. Civilian and Military governments have both been responsible for such actions but looking at statistics it shows that military regimes have performed better than civilian governments. This essays looks to examine the precarious relationship between civilian and military governments, and to analyze the affect they had on political and economic development of Pakistan as a state. It looks to establish that the weak civilian governments were not beneficial economically for Pakistan; instead the military apparatus of Pakistan which works as an internal force within the setup have out performed the civilian governments economically and in providing political stability. Since independence Pakistan has been ruled by Military regimes four times. The first taste of military authoritarianism was in 1958 to 1968 under Ayub Khan as martial law administrator. He was followed by General Yahya Khan. A short period of civilian government gave way to the autocratic rule of Zia Ul Haq from 1978 to 1988 and finally President Musharaff who took over the country in a bloodless coup in 1999 over throwing the civilian government of Nawaz Sharif. The military is an essential part of the Pakistan political set up. ...read more.

The growth in the later half was even better. GDP grew at an annual rate of 6.6% from 1983 to 1988 and large scale manufacturing grew at an average rate of 16.6%.15 Zia Ul Haq had some good fortune. Pakistan benefited from external remittances from the workers in the Middle East from 1975 to 1985 and he was a close ally of the US during the Afghan War. Pakistan received assistance worth $5Billion in the 1980s making it the third largest recipient of U.S aid.16 Political structures were not changed during his time; the feudal aristocracy still exercised considerable power. This was a trend that carried forward in the next decade. With the death of Zia Pakistan entered a precarious politic situation. By 1993 the political situation of Pakistan was an unusual one. From the death of Zia in 1988 till 1993, the country had survived 5 governments, four prime ministers, three presidents, and two chiefs of army staff.17 This would clearly suggest to any reader the fragmentation of political and economic development. A strong government is essential for political and economic development and these years not surprisingly signify the worsening of economic growth and increased political instability. Benazir Bhutto assumed power for the first time in 1988. Her government ignited yet again the debate regarding the balance of power among the President and the Prime Minister. This power struggle led to the failure of her government and eventual dismal of parliament. ...read more.

This is evident from protecting the homeland and the constant military agreements Pakistan had entered as a U.S ally during the cold war period. The military itself was able to over throw civilian regimes with ease and establish itself as the ruling party for years. There was an inherent incapability on part of the civilian regimes to carry forward the tradition of democracy. The failures of civilian regimes automatically paved the way for the military, thus the four times military men have ruled Pakistan. The military regimes have tried to make them democratic through the constitution and gain legitimacy through the political apparatus. In conclusion it would be right to say that economic record of military regimes have done better than those of civilian government, which is evident from the economic indicators over the last 58years of independence. The democratic setup was weak at independence and constant interference by the military in policy and political matters did not allow the process of democratization, and certainly did not pave the way for steady democratic governments. The civilian governments were involved in a balance of power struggle between the Prime and President which effectively carved the way for the military to take over. These internal strife, power struggle and political instability led to poor economic management and the military was able to capitalize on these situations to provide a change, a better change. The current military government has followed the trend and shown a better economic record than the civilian governments of the 1990s. It would be wise to say military governments in Pakistan provided economic and political stability that was missing in civilian governments. ...read more.