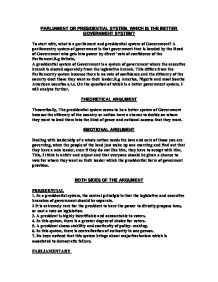 Parliament or Presidential system. Which is the better government system?

PARLIAMENT OR PRESIDENTIAL SYSTEM. WHICH IS THE BETTER GOVERNMENT SYSTEM? To start with, what is a parliament and presidential system of Government? A parliamentry system of government is that government that is headed by the Head of Government who gets into power by direct 'vote of confidence of the Parliament.E.g Britain, A presidential system of Government is a system of government where the executive branch is elected seperately from the legistative branch. This differs from the Parliamentry system because there is no vote of confidence and the citizenry of the counrty elect those they want as their leader.E.g America, Nigeria and most Southe American counties e.t.c. On the question of which is a better government system, I will analyze further. ...read more.

This, I think is unfair and unjust and that everyone should be given a chance to vote for whom they want as their leader which the presidential form of govenment provides. BOTH SIDES OF THE ARGUMENT PRESIDENTIAL 1. In a presidential system, the central principle is that the legislative and executive branches of government should be separate. 2 It is extremely rare for the president to have the power to directly propose laws, or cast a vote on legislation. 3. A president is highly identifiable and accountable to voters. 4. In this system, there is a greater degree of choice for voters. 5. A president shows stability and continuity of policy- making. 6. ...read more.

4. In this system, there is possibility of executive deadlocks, stalemates and immobilism. 5. Also, there are problems of accountability as decisions are taken by the collective cabinet lack of stability in governance. ADMINISTRATIVE ARGUMENT Adminstratively, the parliamentary system of government seems to be a better form of government because everyone in the parliament collectively works hand in hand with the prime minister to deliver good governance to the people since they all have the same goals in mind, unlike the presidential system where there are different parties trying to work at all cost to see other parties fail, so that they can be the people's party. Conclusively, the presidential system of governance proves to be a better form of governance as it woks with the directives of the citizenry of the country or nation through national voting and not vote of confidence. ...read more.