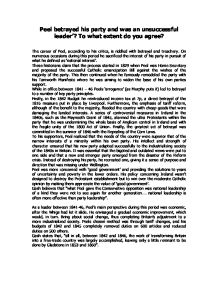 Peel betrayed his party and was an unsuccessful leader'? To what extent do you agree?

Peel betrayed his party and was an unsuccessful leader'? To what extent do you agree? The career of Peel, according to his critics, is riddled with betrayal and treachery. On numerous occasions during this period he sacrificed the interest of his party in pursuit of what he defined as 'national interest'. These historians claim that the process started in 1829 when Peel was Home Secretary and proposed the successful Catholic emancipation Bill against the wishes of the majority of the party. This then continued when he famously remodeled the party with his Tamworth Manifesto where he was aiming to widen the base of his own parties support. While in office between 1841 - 46 Peels 'arrogance' (as Murphy puts it) led to betrayal to a number of key party principles. Firstly, in the 1842 Budget he reintroduced income tax at 7p, a direct betrayal of the 1816 measure put in place by Liverpool. Furthermore, the emphasis of tariff reform, although of the benefit to the majority, flooded the country with cheap goods that were damaging the landed interests. ...read more.

Gash believes that "what Peel gave the Conservative opposition was national leadership of a kind they were not to see again for another generation.... national leadership is often more effective than party leadership". As a leader between 1841-46, Peel's main perspective during this period was economic, after the Whigs had let it slide. He envisaged a gradual economic improvement, which would, in turn. Bring about social change, thus completing Britain's adjustment to a more industrialized society. Peels chosen method was through tariff changes, and his budgets of 1842 and 1845 completely removed duties on 600 articles and reduced duties on 500 others. Gash states that, "all in all, between 1842 and 1846, the work of transforming Britain into a free-trade country was largely accomplished, leaving only a little remnant to be done by Gladstone in 1853 and 1860". The Bank Charter Act of 1844 has generally been praised for introducing a period of financial stability by reasserting the dominance of the Bank of England. London soon became the world's leading financial centre! Meanwhile, the Companies Act of 1844 entailed the compulsory registration of companies, the issue of prospectuses and the stipulation of regular accounts. ...read more.

"Peel's handling of this was in many ways remarkably positive" (Lee). He had been devoted to the ridding of the Corn Laws long before the Irish Potato Famine 1845-6. Peel was convinced that if emergency actions weren't taken, then starvation would have occurred on a missive scale. However, it was clear that relief could not be taken while the Corn Laws were still in place. With little initial support from his Cabinet, he eventually won them over and struggled for 5 months to push through repeal against strong Conservative opposition, eventually emerging victorious in May 1846. Evans claims that Peel "proved himself untrue to the Tory principles on Ireland, on religion, on commerce and, finally and fatally, the landed interest itself". However, in contrast to this all his reforms were intended to uphold the basic features of Conservatism and make the aristocratic landowning faction, more popular. His policies on free trade were part of a continuous process that reached a climax with the ultimate triumph of his career, the repeal of the Corn Laws in 1846. This combined with; the re-organization of the party post 1830, his 1841 election victory and his social and economical reforms, seems to indicate that Peel didn't betray his party and was without doubt a successful leader. ...read more.