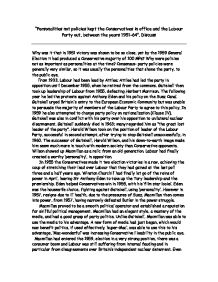 "Personalities not policies kept the Conservatives in office and the Labour Party out, between the years 1951-64". Discuss Why was it that in 1951 victory was shown to be so close, yet by the 1959 General Election it had produced a Conservative majority of 100 MPs? Why were policies not as important as personalities at the time? Consensus- party policies were generally very similar, so it was usually the personalities that shone the party, to the public eye. From 1933, Labour had been lead by Attlee; Attlee had led the party in opposition until December 1955, when he retired from the commons. Gaitskell then took up leadership of Labour from 1955, defeating Herbert Morrison. The following year he led the protests against Anthony Eden and his policy on the Suez Canal. Gaitskell urged Britain's entry to the European Economic Community but was unable to persuade the majority of members of the Labour Party to agree to this policy. ...read more.

Unlike Gaitskell, Macmillan was able to use the media to his advantage. A new form of media had just began, which would now benefit politics, if used effectively. 'super-Mac', was able to use this to his advantage, 'Mac-wonderful' was increasing Conservative likeability in the public eye. Macmillan had entered the 1959, election in a very strong position, there was a consumer boom and Labour was still suffering from internal feuding and in particular from disagreements over Britain's independent nuclear deterrent. Even though, becoming Prime Minister in such difficult circumstances'. Macmillan proved to be on of the most successful of all conservative leaders, which mostly down to luck, down to the failure of the Labour Party. Now this is just looking at the personalities, and how it helped achieve Conservative success. However, was it Consensus politics that kept the Conservatives in power? In the 1959 general election, Conservatives had gained 321 seats, with 48% of the public vote. ...read more.

This new approach led to the 'night of the long knives', where Macmillan caused great offence by dismissing so many of his colleagues, radically reshuffling the cabinet, in 1962. It was clear now, to many that Macmillan was not acting from a position of strength, but rather out of political desperation. On the other hand, the long term damage has probably been exaggerated. It's true that the Conservatives failed to recover sufficiently to win the election of 1964. Yet, it can be argued that the defeat might have been worse had such radical action not been taken, such as Macmillan's economic ideas to be implemented. Expansion after 1962 was certainly an important factor in drawing voters back to the party. Meanwhile, the government was rocked by the Profumo scandal, and by June Macmillan was fighting for his political life. Macmillan support for John Profumo, showed him to have lack of judgement on his part. This certainly weakened Macmillan's already battered position and resigning in 1963 with further contributing factors. ...read more.