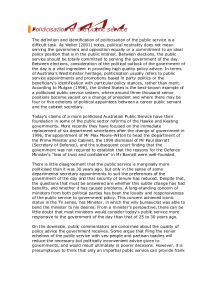 Politicisation of the public service

A long-standing concern of ministers from both political parties has been the loyalty and responsiveness of the public service to government policy. This concern achieved iconic status in the TV series, Yes Minister, in which the wily bureaucrat was able to bend the minister to his desires. From a minister's perspective, there can be little doubt that most ministers would consider today's public service more responsive to the government of the day than that of 25 to 30 years ago. On the downside, public commentators are concerned about the quality of policy advice the government receives. Some argue that filing the senior echelons of the public service with yes-people and partisan toadies will reduce the necessary but politically inconvenient advice given to governments, and would result ultimately in poorer decisions. However, it is presumptuous to think that only an impartial public service can provide frank and fearless advice. This argument is also dangerous as it implies a role for an unelected bureaucracy against an elected government in deciding the national interest. ...read more.

By way of example, Senator Vanstone (2001) noted that when she became a Cabinet minister in 1996 the Secretary of her Department was a former chief of staff of a former Labor Prime Minister and another member of the Senior Executive Service had just come out of the Prime Minister Keating's office just a few weeks before the 1996 election loss. Furthermore, the intention to retain an apolitical public service is reflected in a number of the values in the section 10(1) of the Commonwealth's new Public Service Act 1999 for the Australian Public Service (APS): * The APS is apolitical, performing its functions in an impartial and professional manner. * The APS is a public service in which employment decisions are based on merit. * The APS is responsive to the Government in providing frank, honest, comprehensive, accurate and timely advice and in implementing the Government's policies and programs. * The APS is a career-based service to enhance the effectiveness and cohesion of Australia's democratic system of government. ...read more.