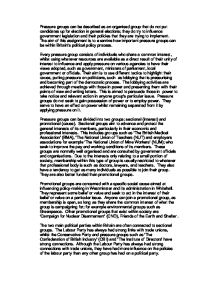 Pressure groups can be described as an organised group that do not put candidates up for election in general elections; they do try to influence government legislation and their policies that they are trying to implement. The aim of this assignment is to examine how important pressure groups can be within Britain's political policy process. Every pressure group consists of individuals who share a common interest, whilst using whatever resources are available as a direct result of their unity of interest to influence and apply pressure on various agencies to have their views adopted, such as government, ministers of parliament, local government or officials. Their aim is to use different tactics to highlight their cause, putting pressure on politicians, such as lobbying that is pressurising and becoming part of the democratic process. The lobbying activities are achieved through meetings with those in power and presenting them with their points of view and writing letters. This is aimed to persuade those in power to take notice and relevant action in anyone group's particular issue. Pressure groups do not seek to gain possession of power or to employ power. They serve to have an effect on power whilst remaining separated from it by applying pressure on it. ...read more.

There are very few interest groups that are known as insider groups who have easy access to ministers and civil servants. Publicity through the mass media is another method that pressure groups can utilize in the hope of influencing society's opinion, such as an organised march, demonstration and public meetings. The notion being that, if they can sway public opinion to support their cause, which in turn could influence the government as political parties occasionally do listen to public opinion if they want to be re-elected or elected. Some pressure groups use this direct action; such as strikes by trade unions, blockading of ports to prevent animal exports, although extreme there are getting their opinions and the plight of their cause across to the public and government. If the public support these methods they can be very successful in changing government policy. The threat to government MPs is that they may lose their Parliamentary seat, which is the most effective and efficient weapon any pressure group can possess. If public opinion brings pressure to bear on MPs through their local constituency parties so that they come to believe that their constituents would vote against them, then MPs will pass on that concern to their party at Westminster. ...read more.

The conservative party lost the general election and the labour party became the new government of the UK on 1st may 1997. "On 27 may 1997, a bill was given its first reading in parliament to ban all handguns including those .22 calibres and smaller that had been exempted under the previous legislation, as well as to revoke the possibility of owners holding their guns on club premises. The new law gained Royal assent on 27 November 1997, and came into force on 26th January 1998"{Parliamentary affairs: pg 329). The snowdrop pressure group highlighted the various tools that a pressure group requires if it is to be successful. However it is worthwhile noting that the media played a huge role in gaining public opinion over an already heartfelt issue. Some may well argue that parliament was already aware of the issue surrounding firearms legislation and that Dunblane had acted as a catalyst to push forward changes in the law, suggesting that the snowdrop campaign was less effective that it appeared. It can take a tragedy like Dunblane to spur a government into action. The forthcoming general election also put pressure on the conservative government and opposing the labour party hoping to become government, to take notice of the Snowdrop campaign. ...read more.