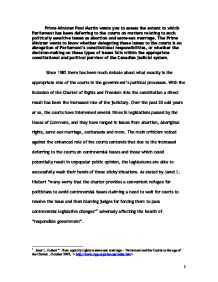 Prime Minister Paul Martin wants you to assess the extent to which Parliament has been deferring to the courts on matters relating to such politically sensitive issues as abortion and same-sex marriage.

Prime Minister Paul Martin wants you to assess the extent to which Parliament has been deferring to the courts on matters relating to such politically sensitive issues as abortion and same-sex marriage. The Prime Minister wants to know whether delegating these issues to the courts is an abrogation of Parliament's constitutional responsibilities, or whether the decision-making on these types of issues falls within the appropriate constitutional and political purview of the Canadian judicial system. Since 1982 there has been much debate about what exactly is the appropriate role of the courts in the government's political processes. With the inclusion of the Charter of Rights and Freedom into the constitution a direct result has been the increased role of the judiciary. Over the past 20 odd years or so, the courts have intervened several times in legislations passed by the House of Commons, and they have ranged in issues from abortion, Aboriginal rights, same-sex marriage, euthanasia and more. The main criticism voiced against the enhanced role of the courts contends that due to the increased deferring to the courts on controversial issues and those which could potentially result in unpopular public opinion, the legislatures are able to successfully wash their hands of these sticky situations. ...read more.

having appealed to the Supreme Court and only then intervening is an execution of the political process in its correct democratic form. By keeping to the individual roles of the judiciary and the legislature the political process enables dialogue and deliberations on legislations passed and if conflicts do arise the role of the Supreme Court is expressive of the claims and interests of the general public and minority groups and insures that they are not being neglected. There is no denying that there is a great deal of support for the new role of the judiciary's. Before the inclusion of the Charter into the constitution the general public was (and to some extent still is) dissatisfied with the unquestioned power of the Parliament and the legislatures6. Many minority groups and interest groups felt that their interests were being neglected. With the enhanced role of the judiciary these minority and interest groups have a say against the "majority of the tyranny" and a facet through which their interests and claims can be addressed and if sound the legislations passed by Parliament can be struck down. This new role of the judiciary does indeed improve the democratic element of the Canadian state, but it is imperative that this new found judicial power and authority should be exercised in the proper constitutional manner. ...read more.