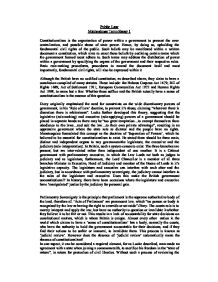 Public Law Michealmas Term Essay 1 Constitutionalism is the organisation of power within a government to prevent the over-centralization, and possible abuse of state power. Hence, by doing so, upholding the fundamental civil rights of the public. Such beliefs may be manifested within a written document-a constitution, which aims to enact these beliefs by outlining certain terms which the government formed must adhere to. Such terms may address the distribution of power within a government by specifying the organs of the government and their respective roles. Basic rule-making procedures, procedures to amend the document itself and most importantly, fundamental civil rights, will also be expressed within it. Although the British have no codified constitution, as described above, they claim to have a constituion compiled of many statutes. These include: the Habeus Corpeus Act 1679; Bill of Rights 1689; Act of Settlement 1701; European Communities Act 1972 and Human Rights Act 1998, to name but a few. Whether these suffice and the British actually have a sense of constitutionalism is the essence of this question. Dicey originally emphasised the need for constraints on the wide discretionary powers of government, in his 'Rule of Law' doctrine, to prevent it's abuse, claiming "wherever there is discretion there is arbitariness". ...read more.

This is shown directly in Malcherek and Steel and indirectly in Cheshire. Conversely, the court's interpretation can be regarded as insufficient to maintain constitutionalism in the face of parliamentary sovereignty, as such interpretation is only possible where the scope of power in the statute is ambiguous. However, parliament has the power to, and often does, define rigidly how the courts should interpret a particular statute, as shown in Simms. Furthermore, just because the courts claim to interpret statutes in compliance to what they believe to be moral standards of society, does this mean the constitutional beliefs of the people are upheld? The common belief is that the judiciary comprises of mainly old, white, public-school educated, upper class men. Therefore can it honestly be said that the judges of the courts are in touch and up to date with the moral demands of a majority working class society, to allow them to enforce such demands? English Common law is created by past cases and precedent, and is believed to have inherent moral conventions, which are upheld in society by applying this law. Though people seem to forget that until the late 20th century, the judicial system was only accessible to the upper-class wealthy and elite, therefore it is likely that English case law contains the social, moral and economic beliefs of this minority. ...read more.

The introduction of the European Convention of Human Rights into English law through the Human Rights Act 1998 can be considered as evidence of British constitutionalism, for the basic civil liberties of the people are now protected by the courts. However, this act only places an obligation upon the courts to interpret all other legislation, as far as possible, in compliance with the act. If this is not possible, they must issue a 'declaration of incompatibility' in relation to the legislation. This just places political pressure upon the government to amend the act, as it is can scar their international reputation. Yet the act fails to guarantee civil liberties from infringement by the government, as shown by the Terrorism Act 2002, which removes every man's basic right to a fair trial (habeous corpeus). On the other hand, if a person's human rights are declared to be infringed by the courts, they know have the right to appeal to the European Court of Human Rights in Strasbourg. This can be very damaging to Britain's political reputation, but this path is not accessible to all for it is a very expensive process and it is only enforceable if Britain regards EC decisions as supreme-which is very doubtful. ...read more.