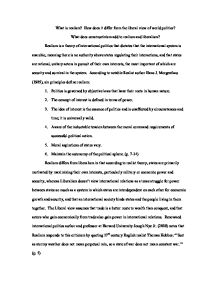 What is realism? How does it differ from the liberal view of world politics? What does constructivism add to realism and liberalism? Realism is a theory of international politics that dictates that the international system is anarchic, meaning there is no authority above states regulating their interactions, and that states are rational, unitary actors in pursuit of their own interests, the most important of which are security and survival in the system. According to notable Realist author Hans J. Morgenthau (1985), six principles define realism: 1. Politics is governed by objective laws that have their roots in human nature. 2. The concept of interest is defined in terms of power. 3. The idea of interest is the essence of politics and is unaffected by circumstances and time; it is universally valid. ...read more.

Renowned international politics author and professor at Harvard University Joseph Nye Jr. (2008) notes that Realism responds to this criticism by quoting 17th century English realist Thomas Hobbes: "'Just as stormy weather does not mean perpetual rain, so a state of war does not mean constant war."' (p. 5) Constructivism is a theory that puts international relations in the context of which aspects of it are socially constructed, meaning which aspects are shaped by social interaction. Constructivists analyze international relations by looking at the goals, threats, fears, cultures, identities, and other elements of "social reality" on the international stage as the social constructs of the actors. Alexander Wendt (1992) is the man most often credited with developing Constructivism. ...read more.

(p. 65) Indeed, an important factor in determining if two states will be friends or foes are the individuals of those states, especially the leaders. Nye (2008) in his book Understanding International Conflicts cites the 1991 Gulf War in which Iraqi dictator Saddam Hussein was a critical factor in instigating as an example of an individual affecting international politics. (p. 36) Of course, the Gulf War example is just one of many throughout history of individual leaders dictating the course of states, which is not consistent with the Realist idea of the state itself being an individual in the international system. Essentially, what Constructivism adds to Realism and Liberalism is the view that individuals and the constitution of and the interaction in society has a much bigger effect on international relations than Realists and Liberalists have traditionally argued. ...read more.