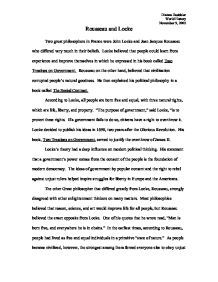 Rousseau and Locke Two great philosophers in France were John Locke and Jean Jacques Rousseau who differed very much in their beliefs. Locke believed that people could learn from experience and improve themselves in which he expressed in his book called Two Treatises on Government. Rousseau on the other hand, believed that civilization corrupted people's natural goodness. He then explained his political philosophy in a book called The Social Contract. According to Locke, all people are born free and equal, with three natural rights, which are life, liberty, and property. "The purpose of government," said Locke, "is to protect these rights. ...read more.

The ideas of government by popular consent and the right to rebel against unjust rulers helped inspire struggles for liberty in Europe and the Americans. The other Great philosopher that differed greatly from Locke, Rousseau, strongly disagreed with other enlightenment thinkers on many matters. Most philosophies believed that reason, science, and art would improve life for all people, but Rousseau believed the exact opposite from Locke. One of his quotes that he wrote read, "Man is born free, and everywhere he is in chains." In the earliest times, according to Rousseau, people had lived as free and equal individuals in a primitive "state of nature." ...read more.

Like Locke, Rousseau argued that legitimate government came from the consent of the governed. However, Rousseau believed in a much broader democracy than Locke had stood for. He argued that all people were equal and that titles of nobility should be abolished. Rousseau's ideas inspired many of the leaders of the French Revolution who overthrew the monarchy in 1789. Rousseau and Locke had many different viewpoints. They each wrote down their idea and published their theory on how people are treated. Locke wrote his idea; people have natural rights, in his book called Two Treatises on Government. In contrast Rousseau wrote his belief, only good government was one that freely formed by the people and guided by a direct democracy, in a book called The Social Contract. Dianna Doebbler World History November 9, 2002 ...read more.