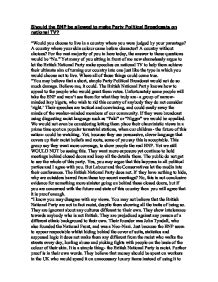 Should the BNP be allowed to make Party Political Broadcasts on national TV?

Should the BNP be allowed to make Party Political Broadcasts on national TV? "Would you choose to live in a country where you were judged by your parentage? A country where your skin colour came before character? A country without choices? For the vast majority of you in here today, the answer to those questions would be "No." Yet many of you sitting in front of me now shamelessly argue to let the British National Party make speeches on national TV to help them achieve their ultimate aim of turning our country into one just like the type in which you would choose not to live. Where all of those things could come true. "You may believe that a short, simple Party Political Broadcast would not do so much damage. Believe me, it could. The British National Party knows how to appeal to the people who would grant them votes. Unfortunately some people will take the BNP and won't see them for what they truly are- a group of narrow-minded lazy bigots, who wish to rid this country of anybody they do not consider 'right.' Their speeches are tactical and convincing, and could easily sway the minds of the weaker-minded members of our community. ...read more.

Our society is already a yob-culture in which children have to grow up. We are not born with the incentive to be racist. A young child can be asked to describe a person and will say every detail except for the fact that they are black Asian or white. We learn racism if we live racism. Too many children in today's World are growing up with the harsh reality of this persistent problem. How would you feel if you knew your children may not be safe because they look different to the majority of children in their area? Their home. Many blacks and Asians experience this feeling day in, day out. Our country needs to move with the other developed countries of this World. The British National Party is holding us back in this area. They claim they are "Creating a future for British children," yet what sort of future is it if they cannot live harmoniously and without prejudice? What sort of future is this for the children of Asian or black descent in our communities? For many of their families have been in this country longer than many white families the British National Party would not discriminate against. ...read more.

Sending asylum seekers home would be almost like committing murder. A crime in the eyes of the law and the God whom all monotheistic religions share. "Films, television programmes, books and other commercial products can be banned by law if they are truly racist without reason, as they can be very influential. I'm sure there is not one person in this room that has ever read an argument or listened to a debate and not reconsidered their opinion. A party political broadcast is a television programme. The BNP are racist and therefore should they not be banned?. Why should the broadcasting committee's rules be broken for one political party? In the cases of directors and authors we can take away free speech, why not with the BNP? We should NOT weaken to let them broadcast their views, ESPECIALLY not in a prime-time slot on television when impressionable members of our community may be watching. My final point for you to consider is this. The main argument for the British National Party being allowed to make Party Political Broadcasts is that by not allowing them to you are taking away their free speech, a right every man should have. Yet if we did allow them to make broadcasts, if they did brainwash the impressionable members of our community, if they did come to power, there may be no free speech to take away. ...read more.