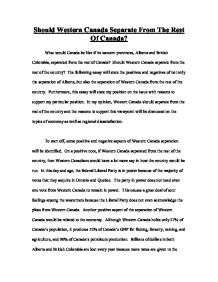 Should western Canada separate from the rest of Canada?

Western Canada is a resource based region and does not have a large industrial base. It would be extremely expensive to have resources sent to neighboring countries so that they can be finished into goods for Western Canada. As well, the resources that Western Canada possesses are non-renewable resources and will not last forever. For example, once new ways to operate machines are discovered, there will be very little need for oil and gas, which is what Alberta depends on. As it is known, my feelings are strong in supporting the separation of Western Canada from the rest of Canada. There is much dissatisfaction between the West and the rest of Canada. The fact that the leaders of our country do not need a single vote from the West to remain in power poses a problem. It is ludicrous to have more than a quarter of the country's population not happy with the party in power. ...read more.

This would be because of the valuable resources that Western Canada holds. With a currency having a higher value, Western Canadian population would prosper and it would be far cheaper for this new country to obtain goods from foreign countries. My position on this issue supports the separation of Western Canada from the rest of Canada. Western Canadians would benefit from this separation greatly because there would be less socialistic policies. These types of policies would reduce apathy and provide an enabling environment for hard-working individuals to be more productive. It would also provide a positive climate for corporations to flourish. This separation, if it were to occur, would be feasible because although the rest of Canada may suffer, they would survive because of their industrial base. This separation would be feasible for Western Canadians no doubt. In fact, it would be a good thing to be unattached to the Canadian government right now, which is becoming more and more socialistic every year. This is my opinion on the issue and I believe very strongly in it. ...read more.