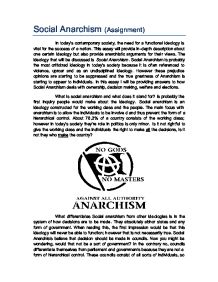 Social Anarchism (Assignment) In today's contemporary society, the need for a functional ideology is vital for the success of a nation. This essay will provide in-depth description about one certain ideology but also provide anarchistic arguments for their views. The ideology that will be discussed is Social Anarchism. Social Anarchism is probably the most criticized ideology in today's society because it is often referenced to violence, uproar and as an undisciplined ideology. However these prejudice opinions are starting to be suppressed and the true greatness of Anarchism is starting to appear to individuals. In this essay I will be providing answers to how Social Anarchism deals with ownership, decision making, welfare and elections. What is social anarchism and what does it stand for? Is probably the first inquiry people would make about the ideology. Social anarchism is an ideology constructed for the working class and the people. The main focus with anarchism is to allow the individuals to be involved and thus prevent the form of a hierarchical control. About 78,3% of a country consists of the working class; however in today's society they're role in politics is only minor. ...read more.

Due to this there is not a concrete answer to how the welfare system should be run, but instead certain views and logic provided in aid for making a decision on how it should be run. Social-Anarchists believe in a social welfare however not if it is in reliant of government or a hierarchical control. If possible councils and assemblies should form a social welfare system without the necessity of a hierarchical control system. This may be financed through the use of tax or the countries economical profits. Due to the fact that anarchists believe that production is for use and not for profit, education and medical care are sought to be the right for all individuals and not to be charged for. However social-anarchists believe that though to be able to provide these conditions, each individual has to contribute their part to society to prevent greediness in society. In conclusion: All individuals are provided social welfare, since it is not right to allow "the bosses" to get care because they are rich whilst the working class to suffer because of economical issues. This is a fundamental pillar of success; the unity of all people together this way in a society will provide the best living conditions and lives for everybody. ...read more.

Communism: This ideology argues the way the anarchists think about the welfare system and whom it shall be provided to. Anarchists believe that the social welfare system should be available for all individuals, poor, rich or disabled; whether it be financed through tax or any other way. Communism argues; they believe that people will only exploit the state and live on social benefits and get medical care they do not deserve. Why should the individuals who have worked and spent their whole life to get an income, to be forced to pay tax that is to be used for welfare for people who do not deserve it. People who have money have the right to pay and get the care they need. Poor individuals will have to do exactly the same thing as everybody else, and that is to work to get the same welfare care. This way of organizing the welfare system is the fairest and does not suppress the wealthy to be forced to give out money they have worked for, to the poor. There should be a welfare system but this way of organizing it will prevent it from becoming a charity; as it will become for the anarchists. ?? ?? ?? ?? ...read more.