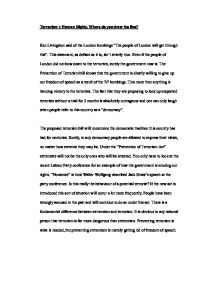 Terrorism v Human Rights. Where do you draw the line? Ken Livingston said of the London bombings &quot;The people of London will get through this&quot;.

Terrorism v Human Rights. Where do you draw the line? Ken Livingston said of the London bombings "The people of London will get through this". This statement, as defiant as it is, isn't strictly true. Even if the people of London did not bow down to the terrorists, surely the government now is. The Prevention of Terrorism bill shows that the government is clearly willing to give up our freedom of speech as a result of the 7/7 bombings. This more then anything is handing victory to the terrorists. The fact that they are proposing to lock up suspected terrorists without a trial for 3 months is absolutely outrageous and one can only laugh when people refer to this country as a "democracy". The proposed terrorism bill will undermine the democratic tradition this country has had for centuries. Surely, in any democracy people are allowed to express their views, no matter how extreme they may be. ...read more.

Yes, I do accept that we face a threat, but is the threat really that great? The government does need to take steps to ensure that the British people are safe but does it really need to go to this extreme? The Government's response to this threat has been to begin dismantling our democracy and implementing totalitarian measures. As Mr Blair has said "The rules of the game have changed". This may be true to some extent but the threat of terrorism the country faces is certainly not large enough for the government to prevent people from expressing their opinions. The "Prevention of Terrorism Act" will also insight racial hatred and many Muslims will suffer greatly from it. Extreme and dangerous political parties, such as the BNP, will no doubt have their membership increase rapidly in size as a result of this act. ...read more.

Politicians, on the other hand, have not had experience in dealing with cases and dare I say it, some of them are not particularly intelligent or respected either. Charles Clarke or a respected judge who knows the law? I know who I would prefer to evaluate the case. The reason that this bill has caused so much controversy amongst the general public and some MPs is the fact that the government seems to be going to extreme measures in order to fight terrorism. So extreme that they are willing to erode many of our civil liberties. While there is always a terrorist threat, it is certainly not great enough for us to destroy freedom of speech. Blair and his Government were spectacularly wrong on Iraq, and it looks like they will be on this. Terrorism v human rights, we would have to have daily terrorist attacks for this country to give up some of its civil liberties. ...read more.