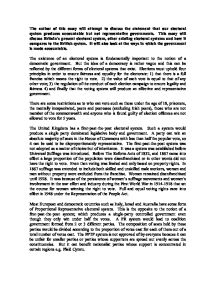 The author of this essay will attempt to discuss the statement that our electoral system produces accountable but not representative governments.

The author of this essay will attempt to discuss the statement that our electoral system produces accountable but not representative governments. This essay will discuss Britain's present electoral system, other existing electoral systems and how it compares to the British system. It will also look at the ways in which the government is made accountable. The existence of an electoral system is fundamentally important to the notion of a democratic government. But the idea of a democracy is rather vague and this can be reflected by the different forms of electoral systems that exist. Elections must uphold four principles in order to ensure fairness and equality for the electorate: 1) that there is a full francise which means the right to vote. 2) the value of each vote is equal to that of any other vote; 3) the regulation of the conduct of each election campaign to ensure legality and fairness 4) and finally that the voting system will produce an effective and representative government. There are some restrictions as to who can vote such as those under the age of 18, prisoners, the mentally incapacitated, peers and peeresses (excluding Irish peers), those ...read more.

Full and equal voting rights cane into effect in 1948 under the Representation of the People Act. Most European and democratic countries such as Italy, Israel and Australia have some form of Proportional Representative electoral system. This is the opposite to the notion of a first-past-the-post system; which produces a single-party controlled government even though they only win under half the votes. A PR system would lead to coalition government formed from 2 or 3 different parties. The composition of seats held by these parties would be divided according to the proportion of votes cast for each of them out of a total number of votes cast. The FPTP system is not approved of by everyone because it can be unfair for smaller parties or parties whose supporters are spread out evenly across the constituencies. But it can benefit nationalist parties whose support is concentrated in certain regions e.g. Plaid Cymru. The PR system is more democratic and fair and representative than the FPTP system but a first-past-the-post system government is stronger and more stable. It emphasises government rather than representation, with the second largest party given an advasereal role as the main Opposition. ...read more.

A Bill allowing this extension must be passed through parliament first. But the problem here is that if we are not happy with the way the government it run we can't get rid of it until the next election or until it has been dissolved after 5 years. The conduct of ministers and government policies is also kept under check by various media bodies. These stories put the private lives and their conduct under close public scrutiny. Recent articles have included David Mellor who resigned as a result of the scandal surrounding his affair with Rebecca Sanchez, Ron Davis who also resigned following a story which exposed his bizarre encounter one night on Clapton Common and Home Secretary Jack Straw for his handling of the Steven Lawrence case. With Jeffrey Archer in prison charged with perjury the system proves that even those in a position of power and influence are not immune from prosecution. However there were situations in which ministers should have faced dismissal such as Robin Cook for his involvement in selling arms to Sierra Leone when the UN specified that no UN member state should sell arms to Sierra Leone. The alternatives? - Australia and France? Conclusion - yes the statement is true ...read more.