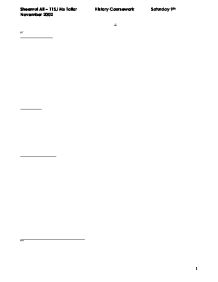 The Battle of Cable Street, 1936 Describe Britain's economic situation between 1929-1936

The Battle of Cable Street, 1936 Q1. Describe Britain's economic situation between 1929-1936 (15) Britain's economic situation before 1929 had already slumped. After World War One, demand for goods ended, as when other countries weren't able to buy goods from Britain, they started up their own factories. By 1921 unemployment had gone up from 2.6% in 1920 to 18%. British industry, mainly coal mining, shipbuilding and steel were in active decline and faced heavy competition from industrializing nations abroad. One of the reasons for this was the policy of free trade. This policy allowed foreign goods to enter Britain without any taxes or charges so foreign goods were cheaper to buy in Britain then actual British goods. Other countries such as the USA tried to prevent foreign competition by having the policy of protection, which allowed them to charge taxes on imported products making them more expensive. Britain's share of all world trade dropped from 18% to 11% over this period. In October 24th 1929, Britain's economy was hit by the Wall Street Crash, leading the world into an economic depression. Prices fell and therefore so did British exports forcing more British factories to close. There was a big balance of payments deficit. America stopped lending money to Britain after world war one and now wanted their money back, Unemployment grew rapidly and by 1932 almost 3 million people were out of work. The Wall Street Crash also affected other parts of Europe. ...read more.

(20) Long Term Reasons for the Battle of Cable Street : Britain in the 1930's was in a crisis. Millions of people were unemployed and were desperate for change, and it seemed the government were not very successful in coping with the economic depression which people were very unhappy about. People turned towards protest movements and political parties in hope for change. These protest groups and extremist parties grew bigger and were influenced by many countries. They used demonstrations and sometimes turned to violence. The British Union of Fascists was formed in 1932 by Sir Oswald Mosley after he resigned from the labour party because his ideas for the end of depression were ignored. Mosley's BUF imitated fascist parties abroad such as the German Nazi party and the Italian Fascist party, because he was impressed and thought a similar set up in Britain would solve its problems. The BUF's policies were anti -Semitic and believed that the Jewish population were to blame and therefore many Jews were attacked and their property destroyed. This happened mainly in the East End of London where there was a big Jewish area. The BUF attracted young members who were know as 'Blackshirts' because of their uniform, they carried out hard training and vowed dedication to their leader. They had special salutes, marches, symbols and guns that made them look like soldiers, giving them power. This was one of the factors, which made people turn towards the extremist party. ...read more.

- The people were unhappy and looking for change and new hope and some thought Mosley could be it. Q.3 Explain why the BUF declined after 1937 (15) After the Battle of cable Street, the BUF was contained and began to lose popularity for a number of reasons. The Battle of Cable Street was very violent and many people feared that such violence would lead to an insurrection in Britain. And also many people didn't like the idea of using violence. Unemployment begun to decrease so people felt less keen to find another solution to their problems. The BUF never really had a widespread support to begin with. The 1931 and 1935 elections results are proof. Some historians argued that the British favoured the parliamentary system and democracy too much to be attracted to extreme political parties for a long period of time. In 1937 The Public Order Act prevented uniforms, marches, and any political movements were banned - losing the whole 'glamour' of the movement. They now seemed like harmless 'ordinary' people with no power. Unrest were kept low due to government action e.g. Unemployment insurance. Britain had no real nationalistic grievances, unlike Germany or Italy. Once World War Two was approaching people realised that the BUF could no longer be tolerated and Mosley was seen as 'unpatriotic' and as a national threat. Once the war started, Mosley was arrested and his party was suspended. World War Two seemed to naturally end the depression so there seemed no need for political extremism. Sheemul Ali - 11SJ Ms Tailor History Coursework Saturday 9th November 2002 1 ...read more.