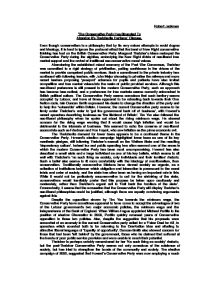 'The Conservative Party Has Struggled To Abandon It's Thatcherite Heritage.' Discuss.

Robert Jackman 'The Conservative Party Has Struggled To Abandon It's Thatcherite Heritage.' Discuss. Even though conservatism is a philosophy that by its very nature attempts to avoid dogma and ideology, it is hard to ignore the profound effect that the trend of New Right conservative thinking has had on the British Conservative Party. Margaret Thatcher's ideas reshaped the Conservative Party during the eighties, embodying the New Right divide of neo-liberal free market support and the revival of traditional neo-conservative moral values. Abandoning the established mixed economy of the Post War Consensus, Thatcher was committed to a rigid strategy of privitisation, putting confidence in the virtues of the market to provide competent public services. Such a commitment to the private industry has continued with following leaders, with John Major choosing to privatise the railways and more recent leaders proposing 'passport' schemes for pupils and patients have also invited competition and free market values into the realm of public provided services. Although this neo-liberal preference is still present in the modern Conservative Party, such an approach has become less radical, and a preference for free markets seems currently entrenched in British political culture. The Conservative Party seems conscious that such territory seems occupied by Labour, and have at times appeared to be retreating back towards their One-Nation roots. ...read more.

Thatcher is perhaps unfairly remembered for her 'No such thing as society' rhetoric, but the post-Thatcher Conservative Party seems not only conscious of the existence of society, but has tried to strengthen the bonds of the community and society. The election campaign of 2005, suggested that Howard's Conservative Party were now employing a much more collective approach, respecting the unity of the community and the nation, rather the demands of the individual. Although traditionally conservatives have seen upholding order within the community and the nation as perhaps their most important goal, it appears that Howard is trying to reach a third way between the two opposites. As a reaction to the permissive attitudes of the sixties, Thatcher's government attempted to restore order and cohesion with a socially authoritarian approach to issues of what had previously considered issues of private choice. Despite the growth of liberal and socially inclusive values within the current political climate, it seems that the current Conservative party are uncertain as to whether it would benefit them to maintain such neo-conservative attitudes or to follow the Conservatives' pragmatic trend and adjust their moral attitudes. While Michael Howard may have suggested a departure from such values, enthusiastically declaring his immigrant background and visiting areas which have a high immigrant population, it seems the party is reluctant to risk losing the support of it's core values, those who appear further on the political right. ...read more.

The Conservative party also seems to be struggling with the predicament of risking the support of their core voters, many of which are often considered further to the right that the party chooses to present itself, in an attempt to increase it's electoral appeal. Iain Duncan Smith's interest in renewing one-nation principles was met with hostility by many of the members of the party. Although some claim that a new approach would benefit the party, it seems that the fear of losing their core support aswell as the party's moderate and cautious attitude are holding the party back. The modern Conservative Party has also had five leaders in the last thirteen years, of which some have implemented their own personal style and charisma into conservative thinking, while others have been tainted with the stigma of their predecessors because of their own lack of personality. There is both strong evidence to suggest that in many respects the current Conservative party is still defined by it's New Right heritage, and also to suggest that it is taking a new direction. Although the Conservative Party pride themselves on being pragmatic, it seems their pragmatism is struggling to provide the flexibility for the current party to achieve mass support. It seems that perhaps this is because of the public image of the party has been damaged, whether fairly or unfairly, as a result of the party's Faustus-bargain of neo-liberal thinking. ...read more.