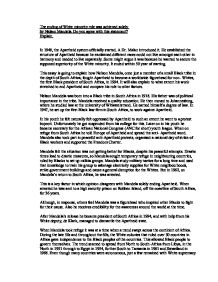 The ending of White minority rule was achieved solely by Nelson Mandela. Do you agree?

The ending of White minority rule was achieved solely by Nelson Mandela. Do you agree with this statement? Explain. In 1948, the Apartheid system officially started. A Dr. Malan introduced it. He established the structure of Apartheid because he exclaimed different races could not live amongst each other in harmony and needed to live separately. Some might argue it was because he wanted to secure the supposed superiority of the White minority. It ended within 50 year of starting. This essay is going to explain how Nelson Mandela, once just a member of a small Black tribe in the depth of South Africa, fought Apartheid to become a worldwide figurehead for non- Whites, the first Black president of South Africa, in 1994. It will also explain to what extent his work stretched to end Apartheid and compare his role to other factors. Nelson Mandela was born into a Black tribe in South Africa in 1918. His father was of political importance in the tribe. Mandela received a quality education. He then moved to Johannesburg, where he studied law at the university of Witwaterstrand. He earned himself a degree of law. In 1947, he set up the first Black law firm in South Africa, to work against Apartheid. ...read more.

Unfortunately for Vorster, his Apartheid policies began to backfire and cause disruption amongst Whites. At the time, technology was modernising in industries that meant that employers needed a steady, skilled workforce that could be trained to use new technology. They could no longer depend on migrant workers. Vorster removal of Black workforces to Bantustans bought about a shortage of stable workforce. Employers began to find breaches in the Apartheid laws to allow Black workers. Later, Blacks realised the power given to them, these White employers relied upon the Black workforce. So they used it for their advantage and negotiated for better conditions and wages. So, between1973 and 1975, widespread walkouts by illegal Black trade unions, across South Africa, demonstrated and confirmed this power and potential ability Blacks now had. Vorster set up two commissions to find a quick solution to the labour shortages, one of which was the Riekert /commission. In 1979 it was recommended the scrapping of the reservation of jobs for Whites and legalising African trade unions. So eventually, he was forced to compromise his policies. In 1973 Vorster approved of a plan recommended of a plan supported by his minister of information, Dr. ...read more.

When de Klerk took office in 1989, he faced an inquisitive nation on why over 4000 people had been killed on the streets, since 1985; why 50000 people were in prison without trial. Also, troops were based in townships and he had the future of White supremacy. In 1989, the National Party suffered from the worst election results since 1948. The party had two options, to reform and end Apartheid or to return to a strict Apartheid regime. As over the years more Whites sympathised with the non-White majority, de Klerk decided that reform would appeal to most voters. De Klerk appears to be one of the strong, main factors in steps to end Apartheid. Even though it may not have been for the good of humanity, his selfishness would eventually lead to the end of Apartheid. It was important as it led to non-Whites having the basic rights. In my opinion Mandela was only a small factor in the ending of Apartheid in comparison to other factors. Although Mandela was a huge success at what he did and influenced others I think de Klerk put the finishing touches to the ending of Apartheid. Non-White roles also played a huge part, with the ANC and OAU. Also Vorster mistakes really added to the success. ...read more.