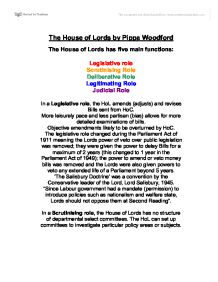 The House Of Lords

The House of Lords by Pippa Woodford

The House of Lords has five main functions:

In a Legislative role, the HoL amends (adjusts) and revises Bills sent from HoC.

Objective amendments likely to be overturned by HoC.

The legislative role changed during the Parliament Act of 1911 meaning the Lords power of veto over public legislation was removed; they were given the power to delay Bills for a maximum of 2 years (this changed to 1 year in the Parliament Act of 1949); the power to amend or veto money bills was removed and the Lords were also given powers to veto any extended life of a Parliament beyond 5 years.

‘The Salisbury Doctrine’ was a convention by the Conservative leader of the Lord, Lord Salisbury, 1945.

“Since Labour government had a mandate (permission) to introduce policies such as nationalism and welfare state, Lords should not oppose them at Second Reading”.

In a Scrutinising role, the House of Lords has no structure of departmental select committees. The HoL can set up committees to investigate particular policy areas or subjects.

The European Committees have 6 subs – committees.

It could consider ‘merits’ of proposals as well as detail and also employ specialist advisors if need be. It is known to be widely admired, for example, Norton.

In both the House of Lords and Commons, members scrutinised assigned legislation as ‘statutory (lawful) instruments’.

In addition, in 1992, Delegated Powers Scrutiny Committee was to consider proposed powers to be assigned to ministers under new Bills.

Also in the Scrutinising Role, peers are relied upon in ‘Question Time’ to answer up to four ‘starred questions’ per day – one peer per day. This takes a brief 30 minutes. Ministerial Questions are generally more prolonged.

In the Deliberative Role the quality of the House of Lords debates is open to interpretation. Whips are present, but not set as rigidly as in the House of Commons.

The Legitimating Role is the “approval giving” body because it is elected.

The HoL contributes to legitimating by giving formal approval to the proposed Bills.

The Judicial functions of the House of Lords are exercised not by the whole House, but by a group of “Law Lords”. The bulk of the House’s judicial business is carried out by the twelve Lords of Appeal in Ordinary, who are specifically appointed for this purpose.

* Judicial means a ruling by or proceeding from a court of justice; "a judicial decision".

Differences from the House of Commons

The House of Lords is unelected. The Commons is elected and therefore can be said to have a representative.

The Lords are not MP’s – they are split between Life, Hereditary and People’s Lords. It can also be noted the Commons has legitimacy, as an elected body.In the UK all legislation has to be approved by the Commons who have the final say on all Bills. This is effectively giving the consent of the people to those laws that they are expected to obey. Without this consent, laws would lack authority. It is purely because of this that the Lords are not given more powers.

The HoL has a Second Chamber and a secondary role.

House of Lord members have no regular salary, if any.

The judicial role of the House of Lords includes Law Lords.

Clerics, bishops and archbishops are all involved in the House of Lords.

The HoL does not hold the government to account; the scrutiny functions of the Commons are more wide-ranging than those of the Lords.

General issues are discussed in more extensive time by the Lords, which is a more conscious chamber than the Commons.

The Government and its legislation can be scrutinized well by the Lords especially because it contains many experts such as Scientists.

A particularly important role of the Lords is a select committee which takes care of EU legislation.

The Commons do not have the right to delay legislation; however the House of Lords have the power to delay for up to a year (Parliamentary Act, 1949).

In conclusion, I believe the more crucial House, in terms of the superiority of its functions and greater authority and power, is the House of Commons - specifically because it is elected and should be a representative for the public, etc.