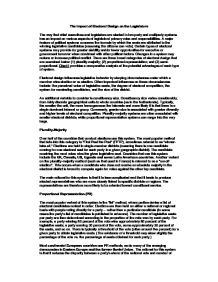 The Impact of Electoral Design on the Legislature.

The Impact of Electoral Design on the Legislature The way that chief executives and legislators are elected in two-party and multiparty systems has an impact on various aspects of legislators' primary roles and responsibilities. A major feature of political systems concerns the formula by which the seats are attributed to the winning legislative candidates (assuming the citizens can vote). Certain types of electoral systems may provide for greater stability and/or fewer opportunities for executive or government turnover when combined with other political factors. Changes in a system may reduce or increase political conflict. There are three broad categories of electoral design that are examined below (1) plurality-majority; (2) proportional representation; and (3) semi-proportional. Chart I provides a comparative analysis of the potential advantages of each type of system. Electoral design influences legislative behavior by shaping circumstances under which a member wins election or re-election. Other important influences on those circumstances include: the perceived value of legislative seats, the degree of electoral competition, the system for nominating candidates, and the size of the district. An additional variable to consider is constituency size. Constituency size varies considerably; from fairly discrete geographical units to whole countries (as in the Netherlands). Typically, the smaller the unit, the more homogeneous the interests and more likely it is that there is a single dominant interest or group. Conversely, greater size is associated with greater diversity and higher levels of electoral competition. Plurality-majority systems are often associated with smaller electoral districts, while proportional representation systems can range into the very large. Plurality-Majority Over half of the countries that conduct elections use this system. The most popular method that falls into this category is "First Past the Post" (FPTP), sometimes referred to as "winner-take-all." Elections are held in single-member districts (meaning there is one candidate running for one electoral seat for each party in a given geographic district). The candidate receiving the most votes wins the given legislative seat. ...read more.

In order to examine these claims we need to go on to consider what consequences flow from the adoption of alternative systems. The Consequences of Electoral Systems A large literature has attempted to examine the impact of alternative electoral systems. The most important consequences which will be examined here include the election of parties to parliament, the proportionality of votes to seats,the production of coalition or single-party governments, the representation of social groups, levels of electoral turnout, and the provision of constituency services. To analyse these factors we will compare the election result for legislative office in the most recent election (mid-nineties) in fifty-three democracies, with data drawn from LeDuc, Niemi and Norris (1996). These democracies included 17 majoritarian systems, 12 mixed or semi-proportional systems, and 24 countries with proportional representation. The Impact on the Party System One of Duverger's most famous claims is that, in a law-like relationship, the plurality rule favours a two-party system while proportional systems lead to multipartyism (Duverger 1955). This raises the question of what is to 'count' as a party, in particular how to count very small parties. In recent years Lijphart (1994) reexamined the evidence for this thesis. The study compared 27 advanced industrialised democracies in 1945-90 based on the Laakso and Taagepera measure of the 'effective number of parliamentary parties' (ENPP) which takes account not only of the number of parties but also the relative size of each. Lijphart found that the ENPP was 2.0 in plurality systems, 2.8 in majority and 3.6 in proportional systems. Within proportional systems he found that the minimum threshold of votes also has an effect on the inclusion of minor parties. [DIAGRAM 2 ABOUT HERE] We can use the same measure to extend the analysis to a wider range of democracies including developing and developed societies, in the most recent election in the mid-1990s. The results of this comparison show that the effective number of parliamentary parties was 3.1 in majoritarian systems, 3.9 in mixed or semi-proportional systems, and 4.0 in proportional systems (see Diagram 2). ...read more.

STV uses multi-member districts, with voters ranking candidates in order of preference on the ballot paper in the same manner as the Alternative Vote (see Alternative Vote). In most cases this preference marking is optional, and voters are not required to rank-order all candidates; if they wish they can mark only one. After the total number of first-preference votes are counted, the count then begins by establishing the "quota" of votes required for the election of a single candidate. The quota is calculated by the simple formula: votes Quota = _________ + 1 seats + 1 The first stage of the count is to ascertain the total number of first-preference votes for each candidate. Any candidate who has more first preferences than the quota is immediately elected. If no-one has achieved the quota, the candidate with the lowest number of first preferences is eliminated, with his or her second preferences being redistributed to the candidates left in the race. At the same time, the surplus votes of elected candidates (i.e., those votes above the quota) are redistributed according to the second preferences on the ballot papers. For fairness, all the candidate's ballot papers are redistributed, but each at a fractional percentage of one vote, so that the total redistributed vote equals the candidate's surplus (except in the Republic of Ireland, which uses a weighted sample). If a candidate had 100 votes, for example, and their surplus was ten votes, then each ballot paper would be redistributed at the value of 1/10th of a vote. This process continues until all seats for the constituency are filled. Single Transferable Vote - Advantages file info As a mechanism for choosing representatives, the Single Transferable Vote (STV) is perhaps the most sophisticated of all electoral systems, allowing for choice between parties and between candidates within parties. The final results also retain a fair degree of proportionality, and the fact that in most actual examples of STV the multi-member districts are relatively small means that an important geographical link between voter and representative is retained. ...read more.