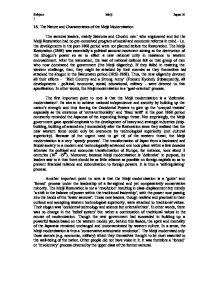 The Nature and Characteristics of the Meiji Modernization

16. The Nature and Characteristics of the Meiji Modernization The samurai leaders, mainly Satsuma and Choshu men' who engineered and led the Meiji Restoration had no pre-conceived program of social and economic reforms in mind - i.e. the developments in the post-1868 period were not planned before the Restoration. The Meiji Restoration (1868) was essentially a political samurai movement aiming at the destruction of the Shogun's power so as to effect a new national unity in resistance to western encroachment. After the restoration, the task of national defence fell on that group of men who now dominated the government (the Meiji oligarchy). If they failed in resisting the western challenge, then, they might be attacked by their enemies as they themselves had attacked the shogun in the Bakumatsu period (1853-1868). ...read more.

Not surprisingly, the Meiji government gave special emphasis to the development of heavy and strategic industries (ship-building, building of arsenal etc.) immediately after the Restoration since they realized that the new western force could only be overcome by technological superiority (not cultural superiority). Because of the urgent need to get rid of the western threat, the Meiji modernization is a very 'speedy process'. The transformation of Japan from a backward and feudal society to a modern and technologically advanced one took place within a few decades whereas the political and economic transformation of Europe, for instance, took about 3 centuries (16th -19th). Moreover, because Meiji modernization is 'defensive' in purpose, its leaders saw to it that there should be as little reliance as possible on foreign capitals so as to prevent financial reliance and subordination to foreign powers. ...read more.

These new leaders, though realistic and practical in their outlook and accepting western technological superiority, were attached to traditional values. Their slogan was 'occidental technology and science but oriental ethics'. In other words, there was no change in the 'belief system' but rather a continuation of traditional values in the course of modernization. Though the new government had succeeded in building up a powerful facade based on the western model, yet, behind this facade, the spirit and mentality of the Japanese remained unchanged and uncontaminated by western culture. In a sense, the Meiji modernization is thus a 'conservative aristocratic revolution'. The Meiji modernized only those sectors (e.g. economic, military) which they themselves thought to be most essential to the well-being of the nation. Other people did not have voice in it. It was therefore a 'forced' or 'involuntary' process directed by the upper class of the former samurai. ?? ?? ?? ?? 2 Subject: Meiji Japan16 1 ...read more.