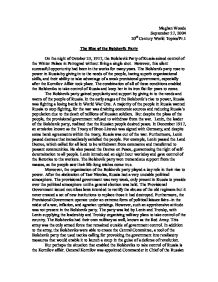 The Rise of the Bolshevik Party

Meghan Woods September 27, 2004 20th Century World Topics/Pr.1 The Rise of the Bolshevik Party On the night of October 25, 1917, the Bolshevik Party of Russia seized control of the Winter Palace in Petrograd without firing a single shot. However, this silent successful opportunity had been in the works for many years. The Bolshevik party rose to power in Russia by giving in to the needs of the people, having superb organizational skills, and their ability to take advantage of a weak provisional government, especially after the Kornilov Affair took place. The combination of all of these conditions enabled the Bolsheviks to take control of Russia and keep her in its iron fist for years to come. The Bolshevik party gained popularity and support by giving in to the needs and wants of the people of Russia. ...read more.

He also passed the Decree on Peace, guaranteeing the right of self-determination to all people. Lenin introduced an eight hour workday and gave control of the factories to the workers. The Bolshevik party won tremendous support from the masses, as the people saw their life-long wishes come true. Moreover, the organization of the Bolshevik party played a key role in their rise to power. After the abdication of Tsar Nicolas, Russia had a very unstable political atmosphere. The provisional government was very weak, only present in Russia to preside over the political atmosphere until a general election was held. The Provisional Government issued countless laws intended to rectify the abuses of the old regimem but it never created a set of new institutions to replace those it had destroyed. ...read more.

General Kornilov was appointed Commander in Chief of the Russian Page 2 forces by Alexander Kerensky, the new prime minister of Russia. However, Kerensky believed that Kornilov was going to try to become dictator of Russia and accused Kornilov of treason. Kornilov, along with other prominent generals, was tried in court. The Kornilov affair shattered Kerensky's relationship with the army and gave the Bolsheviks fresh hope for a takeover. In October, when the Bolsheviks seized power, Kerensky pleaded with the military to help him defeat the oncoming Bolsheviks. But Kerensky would receive no help from the army, allowing the Bolsheviks to take control of Russia unopposed. The peaceful takeover on October 25, 1917 was a victory for the Bolshevik party. With their excellent organizational skills, their understanding of the people of Russia, and the opportunity created by the Kornilov affair, enabled the Bolshevik party to rise to power in Russia, a power that would become infamous for its corruption and fatalities in the future. ...read more.