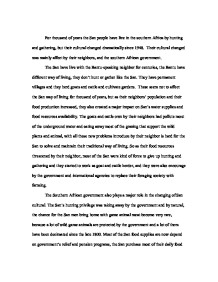 For thousand of years the San people have live in the southern Africa by hunting and gathering, but their cultural changed dramatically since 1948. Their cultural changed was mainly affect by their neighbors, and the southern African government. The San have live with the Bantu-speaking neighbor for centuries, the Bantu have different way of living, they don't hunt or gather like the San. They have permanent villages and they herd goats and cattle and cultivate gardens. These seem not to affect the San way of living for thousand of years, but as their neighbors' population and their food production increased, they also created a major impact on San's water supplies and food resources availability. ...read more.

The Southern African government also plays a major role in the changing of San cultural. The San's hunting privilege was taking away by the government and by natural, the chance for the San men bring home with game animal meat become very rare, because a lot of wild game animals are protected by the government and a lot of them have been decimated since the late 1800. Most of the San food supplies are now depend on government's relief and pension programs, the San purchase most of their daily food supplies with their pension money, and with money they make from tourists and other labor works. The San also fight with the government for their right to stay in the Kalahari Desert Reserve, at first the San were allowed to stay since the game reserve created back in 1961. ...read more.

Affect by the overgrazing lands and the Southern African government's support for them to replace their foraging society with farming, most of the San adapted the changes. Changes for San is not easy, they were once dominated the region with their cultural and now they become the inferior social class in South Africa. With all the changes, the San are able to preserve part of their cultural beliefs, like the article mention that they still practice trance dancing, but when they can't heal the sickness with their own traditional way they are willing to go to the clinic for the western medicine. San's future is unknown, not only their cultural face extinction, their population is also threatening by various epidemics, alcohol and drug abuses. ...read more.