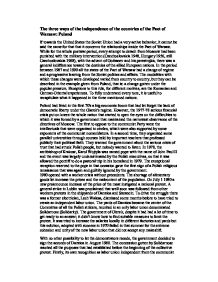 The three ways of the independence of the countries of the Pact of Warsaw: Poland

The three ways of the independence of the countries of the Pact of Warsaw: Poland If towards the United States the Soviet Union had a very active behavior, it cannot be said the same for that that it concerns the relationships inside the Pact of Warsaw. While for the whole postwar period, every attempt to detach from Moscow had been punished with the military intervention (Czechoslovakia 1948, Hungary 1956, still Czechoslovakia 1968), with the advent of Gorbacev and his perestrojka, there was a general indifference toward the destinies of the allied European nations. In the period between 1987 and 1990 all the states of the Pact of Warsaw had a change of regime and a progressive leaving from the Soviet politics and affairs. The modalities with which these changes were developed varied from country to country, but they can be described in the example given from Poland, that is: a change gotten under the popular pressure. Exceptions to this rule, for different motives, are the Romanian and German-Oriental experiences. To fully understand every tone, it is useful to recapitulate what it happened in the three mentioned nations. ...read more.

The danger of a counterrevolution had been seen imminent. The transformation of Solidarity had happened for the impossibility of communication with Kania's government and it had not passed unnoticed even in Moscow. Already on December 5 1980, 500.000 soldiers of the Pact of Warsaw garrisoned the Polish frontiers waiting for an order of invasion that never arrived. In fact, that same night was done a Conference, where Kania and Breznev were present, to decide the fates of Poland. The precise reasons are not known for which was definite to entrust the normalization of the Polish situation to the Polish general, but everything was decided in that reunion. It can be seen that Jaruzelski had one whole year to prepare the action, but as in precedence the government of Gierek had done, so Solidarity did not realize anything. Many important exponents of the labor union had been put to the domiciliary arrests and among them Walesa. The proclamation of the martial law allowed the new regime to try an attempt of return to the past. The following seven years were contradictory. Jaruzelski combined in his own government the greatest personalities of Communist Poland. ...read more.

Once excluded by the government, the communist faction shouted that such behavior was a real scandal, not realizing that they had been victims of a normal political game of the democratic parliamentary life. The charge to form the new government was entrusted to Tadeusz Masowiecki, a faithful adviser of Walesa who started to understand how much life would have been hard at the power just in the moment to get the nomination. In fact, more than two weeks were necessary before the Parliament the confirmed his nomination. The installation of the first Polish democrat government since 1945 also coincided with the disappearance of the Communist Party. Not being more necessary to belong to this formation to get some social advantages, the largest part of the members decided to move on more moderate positions creating the presuppositions for the definitive death of the party. The accords signed directly with Gorbacev allowed definitely systematizing either the role of Poland inside the Pact of Warsaw either the diplomatic relationship with USSR. Gotten this reassurance, the attainment of the democracy was definitive, even if the economic and difficulties inside Solidarnosc were everything else other than next to a solution. ...read more.