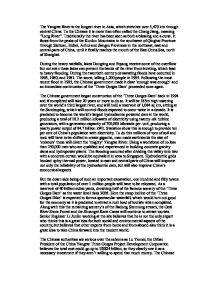 The Yangtze River is the longest river in Asia, which stretches over 5,470 km through central China.

The Yangtze River is the longest river in Asia, which stretches over 5,470 km through central China. To the Chinese it is more than often called the Chang Jiang, meaning "Long River". Traditionally the river has been seen as both a blessing and a curse. It flows from the peaks of the Kunlun Mountains in the southwest of Qinghai Province through Sichuan, Hubei, Anhui and Jiangsu Provinces in the northeast, east and central parts of China, until it finally reaches the mouth of the East China Sea, north of Shanghai. During the heavy rainfalls, lakes Dongting and Poyang receive some of the overflow but not even these lakes can prevent the banks of the river from bursting, which lead to heavy flooding. During the twentieth-century devastating floods have occurred in 1905, 1980, and 1981. The worst, killing 1,200 people in 1995. Following the most recent flood in 1995, the Chinese government made it clear 'enough was enough' and an immediate continuation of the 'Three Gorges Dam' proceeded once again. The Chinese government began construction of the 'Three Gorges Dam' back in 1994 and if completed will take 20 years or more to do so. It will be 185m high towering over the world's third largest river, and will hold a reservoir of 1,084 sq km, sitting at the Sandouping, which will control floods expected to occur twice in a decade. ...read more.

In addition to this the Chinese authority believe that the project will create millions of jobs earning with it 520 billion Yuan's in industrial output. The government believe if everything goes according to plan and according to its schedule the first batch of four generators will be in use by 2003 producing a combined capacity of 2.8 million kilowatts, after 11 years of constructing. The remaining generators are predicted to be completed by 2009. When the generators will be able to generate a total of 293 billion kWh. If successful the Chinese government will be able to pay all loans and interests invested into the project by large international firms and banks in two or three years after the completion of the dam. The government believe that building the 'Three Gorges Dam' will help the environment much more than the environmentalists believe. If the controversial hydroelectric dam is built, it will have twenty-six generators producing 18.2 million kilowatts of power. This is enough to provide ten per cent of China's population with electricity across the country. According to Mr Lu of the Corporation, it is expected that the amount of non-renewable fuels used around the country will drop extraordinarily. For instance it will reduce China's coal burning by 40 million tons a year, and will reduce the emission of harmful gases to the atmosphere like carbon-dioxide by 120 million tons and ...read more.

advised the United States government not to get involved with the project in any way, and then another huge surprise in the opposition of the dam, the World Bank who traditionally has an unpopular reputation for its contribution to projects likewise in developing countries is also not lending any financial support towards the 'Three Gorges Dam'. Although recent scientific investigations from human rights groups from the Chinese Academy of Sciences (CAS) say that the 'Three Gorges Dam' could only have minimal affects on the ecological and environmental issues brought up by the IRN. According to the Vice-President of the Chinese Academy of Sciences, Chen Yiyu the construction of the dam is more likely to affect historical sites, as species of rare animals/fish and plants are all being preserved. Personally I think the dam is an excellent idea for China to move forward as an economically wealthy nation. I can see why people are against the project and truly it depends on, what you believe in? But if there was a huge risk or doubt at all about the construction of the 'Three Gorges Dam, I wouldn't think the Chinese government would have gone through with the scheme as it involves a lot of money and to implement such a scheme close to destroying the country's leading tourist and economical attraction without putting any thought or some 'Hard-Core' research into the planning, I really cant see China or any other country taking such a big risk. ...read more.