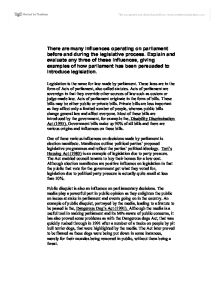 There are many influences operating on parliament before and during the legislative process. Explain and evaluate any three of these influences, giving examples of how parliament has been persuaded to introduce legislation.

There are many influences operating on parliament before and during the legislative process. Explain and evaluate any three of these influences, giving examples of how parliament has been persuaded to introduce legislation. Legislation is the name for law made by parliament. These laws are in the form of Acts of parliament, also called statutes. Acts of parliament are sovereign in that they override other sources of law such as custom or judge-made law. Acts of parliament originate in the form of bills. These bills may be either public or private bills. Private bills are less important as they affect only a limited number of people, whereas public bills change general law and affect everyone. Most of these bills are introduced by the government, for example the, Disability Discrimination Act (1995). Government bills make up 90% of all bills and there are various origins and influences on these bills. One of these various influences on decisions made by parliament is election manifesto. ...read more.

that was quickly rushed through in 1991 after a number of attacks on people by pit bull terrier dogs, that were highlighted by the media. The Act later proved to be flawed as these dogs were being put down in some instances, merely for their muzzles being removed in public, without them being a threat. Legislation may also be influenced significantly by pressure groups. Pressure groups provide individuals with the opportunity to influence government decisions. Any group or organisation can act as a pressure group, lobbying MPs to have their items put on the political agenda. Pressure groups are classified in two categories. These are interest groups that pursue the welfare of their members (e.g. AA) and cause groups that pursue moral and social objectives (e.g. Green peace.). Whereas interest groups usually have functions other than lobbying cause groups are formed solely for this purpose. ...read more.

a well-organised and resourced group may be able to exert a greater degree of influence than the support it receives in society, meaning that pressure group activity may distort, rather than enhance the democratic nature of the process. The process by which tentative proposals for new legislation finally emerge as Acts of parliament is a complex and lengthy one. It involves not only legal but also various social, political and economic considerations for the legislation to operate efficiently, effectively and democratically, therefore certain influences on these decisions made by parliament are necessary. Although necessary, some may prove to be potential problem, as they may be a threat to the democratic nature of the process, and some influences that make the legislative process highly democratic do not make up much of the total. Therefore a system of regulation may be required to prevent abuse of influence. On the whole these influences on the decisions of parliament are inevitable and, in many respects, beneficial. ...read more.