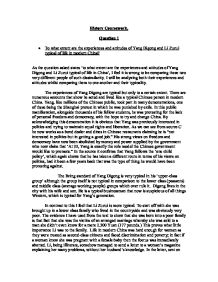 To what extent are the experiences and attitudes of Yang Digong and Li Zucui typical of life in modern China?

It is tradition to hold public executions and an example of this is the tragic death of Wang Jianye who was accused of taking bribes. This has been the case for many government officials and senior employees as well. He was horrifically shot once in the back of his head three days after Christmas in font of a crowd of 5,000. Neither Wang nor his lawyer had the chance to present arguments in his defense. I think the reason for public executions is that it's a way of the government trying to show the public what will happen to them if they were to break the law. There is never any chance for anyone presenting defense and in China death sentences are never commuted. The law is so strict and unquestionable that sixty-eight offences are now punishable by death and some of them include fraud, bribery, hooliganism, smuggling and tax evasion. It has been said that more people in China are executed than in the rest of the world put together. On a different matter I feel that the Tibetans are a cause of concern as they are treated very badly. If China wanted to overpower Tibet and take over than I think they should at least treat them as equals to their own country. The Chinese people have a much higher standard of living compared to Tibetans as they find it difficult to access food or clean water. The majority of them are illiterate owing to them not being fortunate enough or given the opportunity to attend school or get some kind of education. ...read more.

If people criticize the government then this is where a problem would occur as many of the previous presidents, government officials or politics are extremely sensitive to criticism of any kind. An example of this is chairman Mao Zedong's launching of the hundred flowers campaign and Deng Xiaoping democracy wall, both of which were closed down, as criticism got too personal and offensive for them. I think that the 1949 communist programme has been reasonably successful. They made quite a lot of mistake through out their time yet somehow managed to clear them up. As I mentioned before they have kept China together as one, which is a very good thing as many large counties have collapsed and separated into smaller parts. I think that they were successful but only to a certain extent as communism is about the growth of the country and trying to improve it and I think that they have accomplished that. The communist party tried to make sure everyone was treated equally and fairly and I think that this worked because when the great leap forward was launched everyone was paid exactly the same amount and had the same living standards as each other, although the great lead forward was actually unsuccessful. The thing that I dislike about communism was that fact that no one had the choice to vote for anyone else in opposite parties, as there was only one party to vote for in political elections and the government claimed to be running the country on behalf of the workers which in a way I think is untrue. This answers the question opposed, which asked how successful the 1949 communist programme was. ...read more.