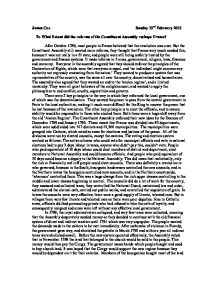 To What Extent did the reforms of the Constituent Assembly reshape France?

James Cox Sunday 23rd February 2003 To What Extent did the reforms of the Constituent Assembly reshape France? After October 1789, most people in France believed that the revolution was over. But the Constituent Assembly still wanted more reforms, they thought that France very much needed this, because it was not really in a fit state, and people were still being unfairly treated by the government and finance systems. It made reforms in 5 areas, government, religion, laws, finances and economy. Everyone in the assembly agreed that they should enforce the principles of the Declaration of Rights, which were that everyone is equal, and 'no individual might exercise any authority not expressly emanating from the nation.' They wanted to produce a system that was representative of the country, was the same all over the country, decentralised and humanitarian. The assembly also agreed that they wanted an end to the 'ancien regime', and a limited monarchy. They were all great believers of the enlightenment, and wanted to apply the philosophies to end conflict, cruelty, superstition and poverty. There were 2 key principles to the way in which they reformed the local government, one of which was the decentralisation. They wanted the power to pass from the central government in Paris to the local authorities, making it much more difficult for the King to recover the power that he lost because of the revolution. ...read more.

The new financial system began in January 1791, indirect taxes had been abolished, and now there was a main tax on land, which replaced indirect taxes and 'taille' and 'vingtieme'. There was also a property tax, which was unpopular, as people saw it as the old capitation in a new form. The new financial system was much better than the old, it benefited the poor a lot because of the abolition of indirect taxes, and there would no longer be any privileges or exemptions. It was much fairer in respect of the fact that all property and income was to be taxed on the same basis. The economic reforms that were enforced included the 'lassiez-faire' attitude to trade and industry, the assembly believed that trade and industry should be free from any government interference, and therefore introduced free trade in grain in August 1789 and removed price controls. There was a creation of a single system of weights and measures which was the decimal system, which the whole population of France had to use now. In June 1971 80,000 workers were threatening a strike, so the assembly passed the Le Chapelier Law, named after Le Chapelier (the deputy who proposed it). This law made trade unions and employers' organisations forbidden. Bargaining, picketing and strikes were made illegal. The assembly really wanted to give the poor some relief, and concluded that nearly 2 million people could only live from begging. ...read more.

About half of the people now rejected revolution because they were faced with a choice between revolution and religion. This was one result of the Civil Constitution, another was the Kings attempt to flee France in June 1791, leading to the downfall of the monarchy. The Constituent Assembly drew up the Constitution of 1791, which would replace an absolute monarchy. Real power was to be passed to an elected assembly. The King would have a suspended veto and there would be one elected assembly. In September the King reluctantly accepted the Constitution, but Marie Antoinette said that the Constitution was 'so monstrous that it cannot survive for long', and was determined to overthrow it. The reforms that the Constituent Assembly made reshaped France in a big way; the whole Government system was changed entirely, and so was the legal system, the financial system and religion. The reforms moved away from the 'ancien regime' and the peasants and bourgeoisie benefited very much from the reforms. The middle classes now controlled new councils, and the poor became landowners. Indirect taxation was abolished, which helped everyone very much, and was definitely a big change in the way the country used to be run. The King lost more and more power from the Constitution of 1791. However, the religious reforms did make some people go against the revolution, and lost the Constituent Assembly some popularity, but it did definitely reshape France. ...read more.