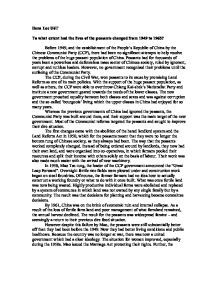 To what extent had the lives of the peasants changed from 1949 to 1965? Before 1949, and the establishment of the People's Republic of China by the Chinese Communist Party (CCP),

Ilana Lee U6T To what extent had the lives of the peasants changed from 1949 to 1965? Before 1949, and the establishment of the People's Republic of China by the Chinese Communist Party (CCP), there had been no significant attempts to help resolve the problems of the huge peasant population of China. Peasants had for thousands of years been a powerless and defenceless mass sector of Chinese society, ruled by ignorant, corrupt and ruthless leaders. However, no government recognised their problems until the surfacing of the Communist Party. The CCP, during the Civil War, won peasants to its cause by promising Land Reform as one of its main policies. With the support of the huge peasant population, as well as others, the CCP were able to overthrow Chiang Kai-shek's Nationalist Party and institute a new government geared towards the needs of the lower classes. ...read more.

The way that the peasants worked completely changed. Instead of being ordered around by landlords, they now had their own land, and were organised into co-operatives, in which farmers pooled their resources and split their income with others solely on the basis of labour. Their work was also made much easier with the arrival of new machinery. In 1958, Mao Tse-tung, the leader of the CCP government announced the "Great Leap Forward". Overnight fertile rice fields were plowed under and construction work began on steel foundries. Of course, the former farmers had no idea how to actually construct a working foundry or what to do with it once built. What was once fertile land was now being wasted. ...read more.

Mao issued the Marriage Act protecting their rights. Further, the situation did improve and by 1962, the economy was showing good signs of recovery from the Great Leap Forward and agricultural produce had increased dramatically. However, the peasants were also subject to a lot of coersion and propaganda by the Communist government. Apart from the Hundred Flowers Campaign, in which they were encouraged to put forward constructive criticism towards the government, their freedom of thought and expression was severely controlled. Even the Hundred Flowers Campaign was reversed, and those who responded to its calls to express their displeasure with the regime were punished. The lives of the peasants did change dramatically between 1949 and 1965, and were to change even more later on. However not all of these changes were positive, although their situation was on the whole hugely improved and their status in Chinese society rose greatly. ...read more.