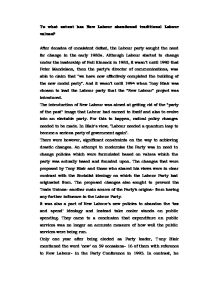 To what extent has New Labour abandoned traditional Labour values?

To what extent has New Labour abandoned traditional Labour values? After decades of consistent defeat, the Labour party sought the need for change in the early 1980s. Although Labour started to change under the leadership of Neil Kinnock in 1983, it wasn't until 1990 that Peter Mandelson, then the party's director of communications, was able to claim that "we have now effectively completed the building of the new model party". And it wasn't until 1994 when Tony Blair was chosen to lead the Labour party that the "New Labour" project was introduced. The introduction of New Labour was aimed at getting rid of the "party of the past" image that Labour had earned to itself and also to evolve into an electable party. For this to happen, radical policy changes needed to be made. In Blair's view, "Labour needed a quantum leap to become a serious party of government again". There were however, significant constraints on the way to achieving drastic changes. ...read more.

One of the first actions that Tony Blair took as the Leader of New Labour was to bring forth a discussion of Clause IV of the Party constitution which had a history going back to 1918, addressing the main principles and beliefs of the Labour Party. After holding a special conference in Central Hall, Westminster, the same venue where Labour's 1918 Constitution was adopted, the Clause was dimineshed and a replacement was put forward. In the first Party conference after the 1997 general elections- in which Labour won with a majority greater than any other party had enjoyed since the 1940s- Tony Blair said: "Last May they (the electorate) voted for New Labour ... They wanted a new Labour Party. Not in the pocket of the trade unions. Not taxing them through the roof. Not chasing after every passing fad of the political fringe." The most radical change that New Labour had adopted was in economical policies. After admitting that Globalisation had taken away the ability to control and direct the flow of wealth centrally, New Labour decided to abandon the Party's policy ...read more.

New Labour is considerably pro-European and supports adopting the single currency. This would not have been the case, if Old Labour was still around. There is clearly enough evidence to claim that New Labour has adopted entirely new beliefs on certain issues, such as the economy, Trade Unions, Europe, etc. But of course, there is no need for argument on this claim since it is widely accepted by the Labour Party and Tony Blair himself that the party has changed and moved on to a new stage. He officially condemns the era in which his party refused to respond to the need for change (and preferred to lose elections rather than give up principles). He addressed his party members in Labour's latest Party conference warning them to learn the lessons of history and remember that the party was banished to the electoral wilderness for 18 years when it refused to face up to the need for change. But the question is, if a Labour Party doesn't stand for Labour values, how can it call itself the Labour Party? Well, it actually calls itself 'New' Labour. ...read more.

Response to Question
A question that begins "To what extent..." invites the candidate to debate the topic of the question, and a discussion of how far New Labour has gone from traditional Labour values could have included counter-arguments, such as ...

Response to Question
A question that begins "To what extent..." invites the candidate to debate the topic of the question, and a discussion of how far New Labour has gone from traditional Labour values could have included counter-arguments, such as the fact that Old Labour only began around 1980, and that the values of Attlee fall more under modern liberal. However, their examination of the ways in which Labour has moved to the right, and away from the dominant democratic socialist strand of Benn and Foot is detailed and considers a variety of ways in which the party changed as it moved towards New Labour, making for a very good response overall.

Level of Analysis
The level of analysis in this essay is excellent. The candidate clearly introduces areas of policy, and then describes how they have changed from Old Labour to New Labour, with a focus on how this may be a move away from traditional socialist positions. The candidate's inclusion of extra information, such as "Tony Blair mentioned the word Ã¢â‚¬ËœnewÃ¢â‚¬â„¢ on 59 occasions- 16 of them with reference to New Labour- in the Party Conference in 1995" demonstrates a good knowledge of Blair's premiership of the party and the period of transition from Old to New Labour.

Quality of Writing
Spelling and grammar are excellent, and the candidate's style of writing is very good. They write in a mature and controlled style, expressing their ideas in a clear and succinct way. There is a clear introduction and conclusion, but personally I do not like the final line (But the question is, if a Labour Party doesnÃ¢â‚¬â„¢t stand for Labour values, how can it call itself the Labour Party? Well, it actually calls itself Ã¢â‚¬ËœNewÃ¢â‚¬â„¢ Labour) and I do not feel that it works well. While acknowledging the genesis of Blair's Third Way, referring to the Conservatives as "Tory", while very common in everyday life and the media, is not strictly correct terminology, and may be a point of contention for examiners.