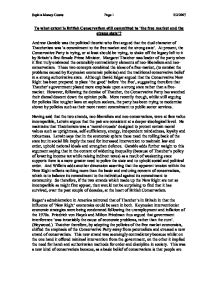 To what extent is British Conservatism still committed to 'the free market and the strong state'?

To what extent is British Conservatism still committed to 'the free market and the strong state'? Andrew Gamble was the political theorist who first argued that the dual character of Thatcherism was 'a commitment to the free market and the strong state'. At present, the Conservative Party is trying, or at least should be trying, to shake off the legacy left to it by Britain's first female Prime Minister. Margaret Thatcher was leader of the party when it first truly embraced the ostensibly contradictory elements of neo-liberalism and neo-conservatism. These two concepts combined the ideas of a free-market, (to combat the problems caused by Keynesian economic policies) and the traditional conservative belief in a strong authoritative state. Although David Edgar argued that the Conservative New Right has been prepared to place 'the good' before 'the free', suggesting therefore that Thatcher's government placed more emphasis upon a strong state rather than a free-market. However, following the demise of Thatcher, the Conservative Party has watched their dismal descent down the opinion polls. More recently though, whilst still arguing for policies like tougher laws on asylum seekers, the party has been trying to modernise shown by policies such as their more recent commitment to public sector services. Having said that the two strands, neo-liberalism and neo-conservatism, were at face value incompatible, Letwin argues that the pair are consistent at a deeper ideological level. He maintains that Thatcherism was a 'moral crusade' designed to protect certain moral values such as uprightness, self-sufficiency, energy, independent mindedness, loyalty and robustness. ...read more.

In a dramatic break with the Labour Party's socialist base, it too advocated a free market; lessening the clear blue water between the new government and its opposition. The adaptation of Clause Four highlighted the extent to which the Labour Party had altered from the socialist days of old, and explains why the general election result was a triumph for 'middle Britain'. Although, Labour's shift on the political spectrum did not of course alter the basic fact that the Conservative Party still advocated the free market along with a strong state. So, as the media hyped up the furore surrounding the new young and 'trendy' Prime Minister and his introduction of 'Cool Britannia', the Conservative Party retired to lick their wounds under the instruction of their new young leader; William Hague. While still remaining distinctly right-wing Hague tried to update and modernise the party, or at least the image of the party. At his first party conference as leader Hague called for a more 'inclusive' conservatism which would 'reach out' to minorities and destroy the image of the Conservative Party as being 'stuffy or intolerant'. Parallels could perhaps be drawn between this speech and that of Theresa May, the present Conservative Party Chairwoman, calling for an end to the notion that the party is the 'nasty party' at this year's conference. However, by 2000 Hague appeared to have done a U-turn and he emphasised the 'traditional, common sense values of conservatism' instead of 'the trendy ideals of a liberal elite'. ...read more.

He writes 'In the 1980s, a Conservative government reformed and improved the performance of the economy keeping taxes low', and expands about his plans to follow in the footsteps of that government; an optimistic plan possibly when one considers the state of the city at present, and the threat of recession. Therefore, while the Conservative Party, at the moment, stands up for public services it still supports the free market and a strong state. The latter being most visible in the debates raging, like across many countries in Europe, over the numbers of asylum seekers being allowed into the country, and the arguments batted back and forth in the Commons over rising crime rates. However, politics has over the few years, had to become more 'user-friendly'. The empathy felt and illustrated by the last general election where 59% of the population turned out highlights the disenfranchisement felt by many people towards politics, and indeed politicians. If the turnout falls, as has been predicted, to 50% in 2005 the situation will have become dramatically worse. This is arguably why spin, and 'special advisors' have become such an important part of politics, trying to appeal to the populace. This explains the Conservative Party's new found feeling for exploiting the potential behind using the public service sector as a weapon with which to fight the stalwart government. The indisputable fact remains though, that while attempting toning down their image as extreme right-wingers, the Conservative Party remains as committed as ever to a free market and a strong state. All they need now is a few competent politicians able to preach their case for them. Sophia Money-Coutts Page 1 5/2/2007 ...read more.