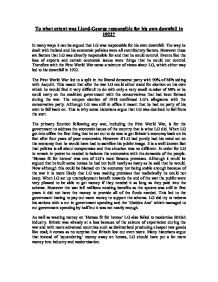 To what extent was Lloyd-George responsible for his own downfall in 1922?

To what extent was Lloyd-George responsible for his own downfall in 1922? In many ways it can be argued that LG was responsible for his own downfall. The way he dealt with Ireland and his economic policies were all contributory factors. However these are factors that LG was directly responsible for and that he could control. Events like the loss of exports and certain economic issues were things that he could not control. Therefore with the First World War came a mixture of views about LG, which either way led to his downfall in 1922. The First World War led to a split in the liberal democrat party with 90% of MPs siding with Asquith. This meant that after the war LG could either stand for election on his own which he would find it very difficult to do with only a very small number of MPs or he could carry on the coalition government with the conservatives that had been formed during the war. The coupon election of 1918 confirmed LG's allegiance with the conservative party. Although LG was still in office it meant that he had no party of his own to fall back on. This is why some historians argue that LG was destined to fail from the start. ...read more.

Many historians argue that instead of 'squandering' money away on homes, LG should have put a lot more money into industry and modernisation. One of the provisos of being part of a provisional government is that both parties have to cooperate in order to make decisions that relate to both parties' political views. One of LG's other major downfalls was his handling of Ireland up until 1922. The failure to implement conscription in 1918 fuelled an ever-present hatred amongst the Irish being under British rule. Ultimately this led to a militant group, the black and tans, being sent over to Ireland to 'sort them out'. This was very unpopular with the Irish because the brutality of this group left many dead. This led to the formation of Sinn Fein and the IRA. Sinn party MPs being voted into office in 1921 was the last straw for the coalition. Some may argue that LG should have offered an ultimatum earlier to avoid the violence. However with the pro-unionist conservatives, this was made very difficult. To end the violence LG told the Irish under 'the Government of Ireland Act' that they could have their own parliament but still be a British state. When Sinn Fein refused the violence continued. The most controversial decision made by LG was to allow Ireland to be an independent state with Britain still owning the 6 counties of Ulster. ...read more.

Although LG did great things while in office such as causing the break-up of the triple alliance and the unemployment benefit scheme and providing some homes for people, LG is noted more for his failures. The failure to keep Ireland under British rule lead to a bitterness amongst the conservative backbenchers which was never to be resolved. Also his 'taxing of the rich' did not go down well at all with the landowning conservative MPs. His 'squandering' of money led him to be unpopular with the public. The only thing that kept LG in power for so long was that he was seen as the man who won the war and his brilliant negotiation skills. The Chanak crisis and the honour's scandal as well as LG's very unstable private life all lead to his dignified resignation at the Carlton Club in 1922. So although certain aspects of the economic policies that LG had to make were out of his control, it was ultimately his wasting of money, handling of Ireland and the smaller scandals that led to LG being disliked by a majority of the public and his own backbenchers. To this extent LG was responsible for his own downfall in 1922 and by looking at all of the facts it is possible to say that although he did good things for the country he held the majority of the responsibility for the decisions made and ultimately his resignation in the four years that he held office. ...read more.