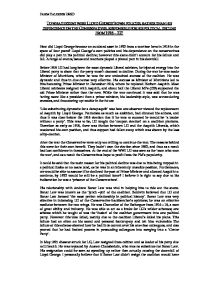 TO WHAT EXTENT WERE LLOYD GEORGE'S OWN POLICIES, RATHER THAN HIS DEPENDENCE ON THE CONSERVATIVES, RESPONSIBLE FOR HIS POLITICA

TO WHAT EXTENT WERE LLOYD GEORGE'S OWN POLICIES, RATHER THAN HIS DEPENDENCE ON THE CONSERVATIVES, RESPONSIBLE FOR HIS POLITICAL DECLINE FROM 1918 - 22? How did Lloyd George become an outdated asset in 1922 from a wartime hero in 1918 in the space of four years? Lloyd George's own policies and his dependence on the conservatives did play a part in his political decline; however this alone didn't account for his failure and fall. A range of events, issues and reactions played a pivotal part in his downfall. Before 1918 LG had long been the most dynamic Liberal minister, he injected energy into the Liberal party to show that the party wasn't doomed to decline. During the war he was made Minister of Munitions, where he was the one undoubted success of the coalition. He was dynamic and thus in due course very effective. His success as Minister of Munitions led to him becoming Prime Minister in December 1916, where he replaced Herbert Asquith. Most Liberal ministers resigned with Asquith, and about half the Liberal MPs (120) supported the old Prime Minister rather than the new. While the war continued it was said that he was 'acting more like a president than a prime minister, his leadership style, was accumulating enemies, and thus storing up trouble in the future. ...read more.

Only �64 million was pruned from the 'Geddes Axe'. Housing was an issue that had to be addressed, the housing programme by Addison was a qualified success however, and it did not live up to people's hopes or expectations. Addison had spent too much. He was unable to build 'homes fit for heroes'; instead it was now referred to 'homes only heroes would agree to live in'. Addison failed to look into the future and predict a rapid fall in prices during the slump. However he had done much to ensure that in future housing needs were looked upon as a government responsibility instead of being left to market forces. Once again the finger of blame was pointed at Lloyd George he had appointed a man who was unable to deliver a land fit for heroes the promise had been broken. Lloyd George lost many working class supporters due to his ill handling of the industrial situation after the war. The rise of unemployment after the war made him an electoral liability. Success or failure of an industry depended on the economy, and after the war the British economy suffered. There was a new militancy from the trade unions after the war, there was a sense of 'red revolution' growing in Britain leading on from the success of the Bolshevik revolution. ...read more.

The Irish question was eventually answered to but not 'solved'. On 6th December 1921 the Anglo - Irish treaty was signed, the PM in my opinion succeeded in coming to a resolution whilst the cloud of intricacies of the problem hanging over him. Some Conservatives were disgusted with the idea of partition, questions arose from this settlement, was this a sign that the British Empire disintegrating? However majority of the Conservatives voted for the treaty. The aftermath of the treaty caused outrage in Ireland, Michael Collins and many others were killed, a virtual civil war began in the new self-governing state. The finger was pointed at Lloyd George. To answer the question, to what extent were Lloyd George's own policies, rather than his dependence on the Conservatives, responsible for his political decline, it is fair to say that his fall from office was of his own making, as the years passed on he was indecisive, ineffective, and as a result confidence factor grew into the Conservatives that they could succeed without him and they could make decisions or choices must better than him. On the 19th October, Stanley Baldwin's speech did play a part as it expressed simply and clearly what many Tory MPs were thinking. At the Carlton Club meeting in 1922 the Conservatives voted to end the coalition and this ditch Lloyd George as Prime Minister. ?? ?? ?? ?? FAHIM TALUKDER U6SD ...read more.