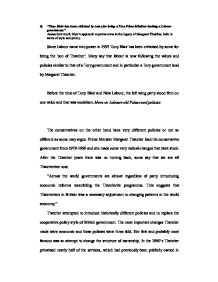 &quot;Tony Blair has been criticised by some for being a Tory Prime Minister leading a Labour government.&quot; Assess how much Blair's approach to power owes to the legacy of Margaret Thatcher, both in terms of style and policy.

6) "Tony Blair has been criticised by some for being a Tory Prime Minister leading a Labour government." Assess how much Blair's approach to power owes to the legacy of Margaret Thatcher, both in terms of style and policy. Since Labour came into power in 1997 Tony Blair has been criticised by some for being the 'son of Thatcher'. Many say that labour is now following the values and policies similar to that of a Tory government and in particular a Tory government lead by Margaret Thatcher. Before the time of Tony Blair and New Labour, the left wing party stood firm on one value and that was socialism. More on Labours old Values and policies The conservatives on the other hand have very different policies or not so different as some may argue. Prime Minister Margaret Thatcher lead the conservative government from 1979-1990 and she made some very radical changes that have stuck. After the Thatcher years there was no turning back, some say that we are all Thatcherites now. "Across the world governments are almost regardless of party introducing economic reforms resembling the Thatcherite programme. This suggests that Thatcherism in Britain was a necessary adjustment to changing patterns in the world economy." Thatcher attempted to introduce historically different policies and to replace the cooperative policy style of British government. The most important changes Thatcher made were economic and these policies were three fold. ...read more.

This is very similar to Thatcher's privatisation changes but there is one main difference. Instead of the government producing a large sum of money for a new school, for example, they agree to pay a private firm an annual fee, this is to cover the cost of the entire construction, maintenance and management. One of the arguments against PFI is that this 'letting' of services could lead to actual services being taken over by private firms. For example the fear is that services such as teaching and healthcare will be in private hands. Not only is there the threat that standards will fall but this means a vast number of public-sector workers face losing employment rights. Chancellor, Gordon Brown supports PFI and thinks it is the quickest way of building new hospitals, schools etc. he also believes that PFI will help stretch the governments money in but in 2002 said "The issue is not public good, private bad -or private good public bad." From this statement we can gather that even the government agree that there are problems and a risk involved with PFI, but they obviously think that the private out-weighs public. The main question is why is labour adopting these economic changes when privatisation is a Tory idea? Blair has mimicked Thatcher which prompted many to raise the point of whether Tony Blair is a Tory Prime Minister leading a labour government. ...read more.

However some believe that the number of backbenchers revolting against Tony Blair would have been even higher if the Government had not repeatedly told MP's that this would not be their last chance of expressing opinion before going to war. The public were just as against war as Tony Blair's backbenchers. "The decision to go to war over Iraq had significant implications for Britain in terms of foreign policy. Despite the apparent internationalism of the New Labour project, Blair was prepared to act without UN approval and against the wishes of a large section of the international community" governing as new labour- policy and politics under Blair (Jim Butler) page 207 There were of course a huge amount of anti-war protests and it is thought that some members of the public no longer trust Tony Blair and the labour government Butler is correct when he says; Tony Blair's decision had 'significant implications'. This is reminisant to when Margaret Thatcher took Britain to war in the Falklands (1982) because she consulted no-one in her decision. Although there is one major difference, the Falklands Island War, or more importantly the victory of this war boosted Thatcher's popularity rather than suffering a loss of popularity like Tony Blair. Another similarity between Blair in Thatcher is there 'special relationships' with the USA and in particular the USA presidents. Tony Blair had his first meeting with Bill Clinton in May 1997 One thing that can not be ignored is the recent queen's speech. This contained one very important and much debated issue that is university tuition fees. ...read more.