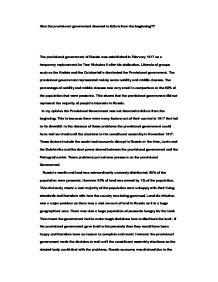 Was the provisional government doomed to failure from the beginning

The Bolsheviks were a political party with an extremely dedicated leader in Lenin. Lenin's main aim in life was revolution. He was extremely committed to it. Lenin's dedication to revolution was shown by his April thesis. As soon as Lenin returned from exile one of his first steps was to release a manifesto, which we call the April thesis. In this manifesto Lenin declared that he would end all cooperation with the provisional government. This bold step showed his dedication to revolution aswel as signalling a problem for the provisional government. The manifesto also included an immediate end to the war. This would of pleased many of the soldiers, as they wanted an end to the war. There was also land to be given to the peasants, soviets to take power and in the end a worldwide socialist revolution. All of these points were designed to please the majority peasants, workers and soldiers as to give them land and to end the war is what they want. Where the provisional government failed to please the majority of the population by giving them land, Lenin knew that this was one way to help gain popularity and power, as it would please the masses and unite them against the provisional government. Lenin and the Bolsheviks were also good at propaganda and offered the people of Russia an alternative leadership that would benefit them. They used slogans such as 'Bread, peace and land'. ...read more.

Lenin needed to Soviets name to keep the support of the people and the soviet needed their resources and organisation. Between them they occupied key positions in the capital Petrograd aswel as arresting the provisional government. They forced the Prime Minister Kerensky to escape into exile and took power. The provisional government took over power at an extremely difficult period in Russian history. The country was in deep social and economic unrest, they were involved in the world first ever war and loosing poorly. They were also faced with a large-scale revolutionary movement that had been brewing for a very long time. The provisional governments job was to keep the country going until the elections in November. However they were unable to do this because of extreme pressure from revolutionaries such as Lenin and the Bolsheviks. This led to its demise in October to the power of the Bolsheviks and soviet. If the Provisional Government was not faced with such pressures and problems it could well have survived the 10 months it was required to however failed during the latter stage of their reign In my opinion this was not a foregone conclusion from the beginning. The provisional government showed their power by holding out from several attempted coups. They could have also taken steps to tame the revolutionary movement by giving peasants more land and catering to their needs, as they were the vast majority of the population. However they did not and the provisional government t came to an end in October and Lenin and the Bolsheviks took power. ...read more.