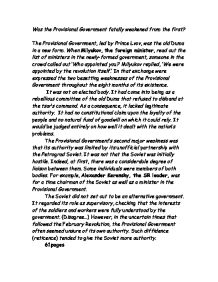 Was the Provisional Government fatally weakened from the first? Notes

Was the Provisional Government fatally weakened from the first? The Provisional Government, led by Prince Lvov, was the old Duma in a new form. When Milyukov, the foreign minister, read out the list of ministers in the newly-formed government, someone in the crowd called out 'Who appointed you?' Milyukov replied, 'We were appointed by the revolution itself.' In that exchange were expressed the two besetting weaknesses of the Provisional Government throughout the eight months of its existence. It was not an elected body. It had come into being as a rebellious committee of the old Duma that refused to disband at the tsar's command. As a consequence, it lacked legitimate authority. It had no constitutional claim upon the loyalty of the people and no natural fund of goodwill on which it could rely. It would be judged entirely on how well it dealt with the nation's problems. The Provisional Government's second major weakness was that its authority was limited by its unofficial partnership with the Petrograd Soviet. It was not that the Soviet was initially hostile. Indeed, at first, there was a considerable degree of liaison between them. Some individuals were members of both bodies. For example, Alexander Kerensky, the SR leader, was for a time chairman of the Soviet as well as a minister in the Provisional Government. The Soviet did not set out to be an alternative government. It regarded its role as supervisory, checking that the interests of the soldiers and workers were fully understood by the government. (Disagree...) However, in the uncertain times that followed the February Revolution, the Provisional Government often seemed unsure of its own authority. Such diffidence (reticence) tended to give the Soviet more authority. 61pages There was also the impressive fact that the Soviet pattern had spread widely in the aftermath of the February Revolution. Soviets soon appeared in all the major cities and towns of Russia. ...read more.

The dominant problem was the war. For the Provisional Government after February 1917 there was no choice but to fight on. Unless it did so it would no longer receive the supplies and the war-credits from the western allies on which it had come to rely. Tsardom had left Russia virtually bankrupt. No Russian government at the time could have carried on without large injections of capital from abroad. Foreign bankers were among the first to visit Russia after Nicholas' abdication to ensure that the new regime was committed to pursuing the war. The strain that this obligation imposed on the Provisional Government finally proved unsustainable. Its preoccupation with the war prevented it from dealing with Russia's social and economic problems. It was a paradoxical situation: in order to survive the PG had to keep Russia in the war, but in doing so it destroyed its own chances of survival. The question of the war brought about the first serious rift between the Petrograd Soviet and the PG. On 14 March the Soviet had issued an 'Address to the people of the whole world, declaring for peace without annexations and indemnities (reparations). Nonsense was made of the government's acceptance of the 'Address' by the repeated assurances of Milyukov, the foreign minister, and that Russia would continue to play its full military role as one of the allies. Late in April, a series of violent demonstrations occurred in Petrograd against Milyukov. These resulted in his resignation and that of Guchov, the war minister, early in May. In the reshuffled cabinet, Kerensky became the war minister and places were found for leasing Mensheviks and SRs. It was hoped that this apparent leftward shift of the PG would ease its relationship with the Soviet. In fact, the opposite happened. The socialists in the government tended to become isolated from the Soviet. This was because in joining the government they had to enter into coalition with the Kadets, which opened them to the charge that they were compromising with the bourgeoisie. ...read more.

The majority of its members came from the propertied classes. They were unlikely to be enthusiasts for a policy that would threaten their own position. They had supported the February Revolution as a political change, not a social upheaval. They were quite willing for the estates of the fallen monarchy to go to the peasants, but they had no intention of losing their own possessions in a general land redistribution. This had been the thrust of Lenin's assertion in the 'April Theses' that tsardom had been replaced by a bourgeois, not a revolutionary regime. Yet there was a sense in which the land issue was equally difficult for the Bolsheviks. As a Marxist party, they had dismissed the peasantry as, in Trotsky's words, "the pack animal" of history lacking true revolutionary initiative. By definition, the proletarian revolution was an affair of the industrial working class. Lenin, on his return in April, declared: "It is not possible for a proletarian party to rest its hopes at this time on a community of interest with the peasantry". However, faced with the fact of peasant land-seizures throughout Russia, Lenin was quite prepared to make a tactical adjustment. Appreciating that it was impossible to ignore the disruptive behaviour of four-fifths of the population, he asserted that the special circumstances of post-tsarist Russia had produced a situation in which the peasants were acting as a truly revolutionary force. This modification of Marxist theory thus allowed Lenin to add Russian peasants to the proletarian cause. 'Land to the Peasants', a slogan lifted from the programme of the SRs, became the new Bolshevik catchphrase. What this meant in mid-1917 was that the Bolsheviks recognised the peasant land-seizures as a fait accompli. Lenin declared that what the peasantry had done was wholly in keeping with 'revolutionary legality'. This produced a considerable swing to the Bolsheviks in the countryside. It had the further effect of splitting the SRs, a significant number of whom began to align themselves with the Bolsheviks. Known as the Left SRs, they sided with the Bolshevik Party on all major issues. ...read more.