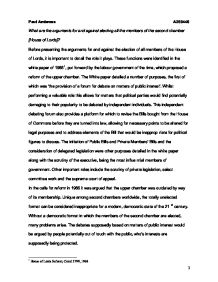 What are the arguments for and against electing all the members of the second chamber of the House of Lords?

Paul Ambrose A259446 What are the arguments for and against electing all the members of the second chamber [House of Lords]? Before presenting the arguments for and against the election of all members of the House of Lords, it is important to detail the role it plays. These functions were identified in the white paper of 19681, put forward by the labour government of the time, which proposed a reform of the upper chamber. The White paper detailed a number of purposes, the first of which was 'the provision of a forum for debate on matters of public interest'. Whilst performing a valuable role this allows for matters that political parties would find potentially damaging to their popularity to be debated by independent individuals. This independent debating forum also provides a platform for which to revise the Bills bought from the House of Commons before they are turned into law, allowing for necessary points to be altered for legal purposes and to address elements of the Bill that would be inappropriate for political figures to discuss. The initiation of Public Bills and Private Members' Bills and the consideration of delegated legislation were other purposes detailed in the white paper along with the scrutiny of the executive, being the most influential members of government. ...read more.

At present the majority government Labour have in the House of Commons is limited by the Lords. The upper chamber can make it difficult for legislation against, as they see it, the public interest to pass through immediately by delaying it. The process by which bills from the commons are revised also allows for some alterations before they are made into statute, again providing a safety net to limit the power a majority government can have. A further argument against absolute election is that members of the upper house who are responsible for the scrutiny of the executive could potentially become influenced by the parties that they would belong to. An inevitable outcome of electing the whole of the second chamber would be that individuals would ally themselves to political parties in order to gain campaign funds and promote themselves as candidates, thus removing the independence so vital to the role of the Lords. Not only would candidates have to limit their political views to the narrower spectrum that the major political parties provide for, thus as a consequence limiting the range of arguments present in debates, it would become necessary to follow the lead of the party in the commons in order to maintain the relationship. ...read more.

These leaders of the community would probably be absent in an entirely elected chamber and unable to perform the important role that they do. Their inclusion in the house helps tremendously when debates regarding issues involving morality and political black holes such as abortion are raised. Their independence and lack of political allegiance allows some points that may not have otherwise been brought about to be raised and then discussed. Whilst the current format of the lords is undemocratic and dated it is essential to the preservation of democracy and our political stability. It is this format that makes up for the shortcomings of representative democracy and helps maintain some of the positives of direct democracy. Whilst the case for reform may be a just one in the form of more life peers and fewer hereditary ones there is no real basis for complete election on the basis of protecting the peoples interests. "Agreement in principle amongst the sophisticated tends to be less than whole hearted and to beget new disagreements when principle is translated into detail. Real enthusiasm for Lords' reform is too often to be found among the eccentric and the na�ve, who may have little idea of the mediocre performance of second chambers in so many other countries or of the limited expectations that can be reasonably be reposed in a reconstituted British second chamber." - S. A. de Smith and R. Brazier. ...read more.