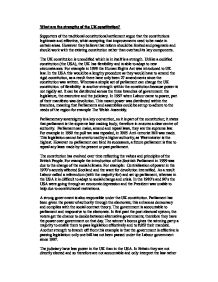 What are the strengths of the UK constitution?

What are the strengths of the UK constitution? Supporters of the traditional constitutional settlement argue that the constitutions legitimate and effective, whist accepting that improvements need to be made in certain areas. However they believe that reform should be limited and pragmatic and should work with the existing constitution rather than overhaul its key components. The UK constitution is uncodified which is in itself is a strength. Unlike a codified constitution (the USA), the UK has flexibility and is able to adapt to new circumstances. For example in 1998 the Human Rights Act was introduced to UK law. In the USA this would be a lengthy procedure as they would have to amend the rigid constitution, as a result there have only been 27 amendments since the constitution was written. ...read more.

Parliament can make, amend and repeal laws, they are the supreme law. For example in 1990 the poll tax was repealed, in 2005 Anti-terrorist Bill was made. This legislation cannot be overturned by a higher authority, as Westminster is the highest. However no parliament can bind its successors, a future parliament is free to repeal any laws made by the present or past parliament. The constitution has evolved over time reflecting the values and principles of the British People. For example the introduction of the Scottish Parliament in 1999 was due to the change of the social climate. For example: Centralisation of power in the 1970's acutely affected Scotland and the want for devolution intensified. ...read more.

The judiciary have less power in the UK than in the USA. In Britain they are not directly elected and so therefore are not accountable and only interpret the law rather than make it. In the USA judges and bureaucrats can influence important political decisions, even thought they are not elected or accountable. The Supreme Court can strike a law from the statute book as unconstitutional. In the UK judges cannot do this. There are many strength of the UK constitution as it is uncodified: the main strength being its flexibility. In 2001 (due to September 11th terrorist attack) the UK government quickly passed a law against terrorists to safeguard the nation whereas the USA were not able to do so, thus illustrating the benefits of the UK constitution. ...read more.