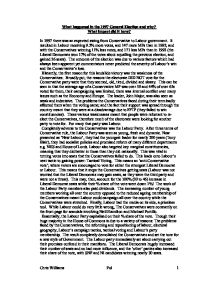 What happened in the 1997 General Election and why? What impact did it have?

What happened in the 1997 General Election and why? What impact did it have? In 1997 there was an expected swing from Conservative to Labour government. It resulted in Labour receiving 9.2% more votes, and 147 more MPs than in 1992; and with the Conservatives winning 11% less votes, and 171 less MPs than in 1992 (the Liberal Democrats won 17% of the votes about equalling the previous election, and gained 26 seats). The outcome of the election was due to various factors which had always been apparent yet commentators never predicted the severity of Labour's win and the Conservative's loss. Blatantly, the first reason for this landslide victory was the weakness of the Conservatives. Broadly put, the reasons the electorate DID NOT vote for the Conservative party were that they seemed, old, tired, divided and sleazy. This can be seen in that the average age of a Conservative MP was over 50 and 44% of over 65s voted for them, their campaigning was limited, there was internal conflict over many issues such as the Economy and Europe. ...read more.

This means that it stops the Conservatives getting seats (Labour was not worried that the Liberal Democrats may gain seats, as they were the third party and were not a threat). This may, then, account for the 100% (20 to 46) increase in Liberal Democrat seats while their % share of the vote went down 1%! The work of the Labour Party members also paid dividends. The increasing number of young members working all over the country opposed to the reduced ageing membership of the Conservatives meant Labour could campaign all over the country while the Conservatives were stretched. Finally, Labour had the media on its side, a priceless tool. While Labour could do very little wrong, The Conservatives were constantly on the front page for scandals involving Neil Hamilton and Michael Portillo. Essentially, the Labour Party capitalised on their % share of the vote. Though their huge majority in the House of Commons is due to a variety of reasons: The problems faced by the Conservatives, the reforming and repositioning of labour, electoral geography, Labour's campaign tactics, tactical voting and Labour's party membership. ...read more.

This included asylum seekers and the Euro, which were not generally important to the electorate. Whereas Labour and the Liberal Democrats concentrated on more important issues such as NHS and education. There was less than a 2% swing from Labour to Conservatives, and overall there was little change from 1997. The huge apathy in 2001, shows a trend that in 1997 it was an Anti-Tory election, and in 2001 it was Anti-any party election. This may have been mainly due to party de-alignment where they basically all have the same policies (Labour are said to be as right as the Tories). This election has shown the parties that less people are interested, and so political participation has been high on the agenda. All parties have also tried to distinguish themselves, and make promises that will actually change people's lives (they say) for the better. It has ended with more conflict in the House of Commons, and promise of reform in the future (Euro still at Tony Blair's discrepancy). Desperate to set his party apart, it could be possible that the PM thinks a victory in Iraq will improve his standings and cause less apathy with more support for his party. Chris Williams Pol 1 ...read more.