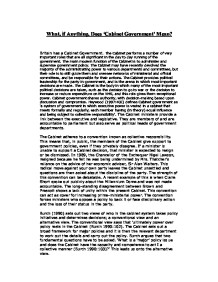 What, if Anything, Does 'Cabinet Government' Mean? Britain has a Cabinet Government. The Cabinet performs a number of very important roles that are all significant in the day to day running of the government. The main modern function of the Cabinet is to administer and supervise government policy. The Cabinet may have recently devolved the majority of the administrating power to various departments and committees, but their role is to still guide them and oversee networks of ministerial and official committees, and be responsible for their actions. The Cabinet provides political leadership for the party in government, and is the arena in which most important decisions are made. The Cabinet is the body in which many of the most important political decisions are taken, such as the decision to go to war or the decision to increase or reduce expenditure on the NHS, and this role gives them exceptional power. Cabinet government shares authority, with decision-making based upon discussion and compromise. Heywood (1997:402) defines Cabinet government as 'a system of government in which executive power is vested in a cabinet that meets formally and regularly, each member having (in theory) ...read more.

Burch argues that two fundamental questions have to be asked. 'What is a 'major' policy issue and does the Cabinet have the capacity and competence to act I a collective manner (Burch 1990:103)?' This leads us onto the alternative view. The frequency of Cabinet meetings has declined over the years. Since 1974, the Cabinet meetings have only taken place weekly. Under Blair, this weekly meeting is usually completed in an hour. This is surely not enough time to formulate and agree on major policies. Many of the major policies that do reach the Cabinet are effectively pre-determined by the time they arrive (Burch 1990:104. In the UK, prime ministerial power has subverted the collective nature of UK government. The full Cabinet is merely the focal point in the British cabinet system. Cabinet committees are set up comprising of subject specialists to examine policy proposals in more detail than is possible in weekly Cabinet meetings. This gives strength to the prime minister who appoints the committees. When the proposals are announced in a cabinet meeting, there is often a lack of expertise to challenge them (Heywood 1997:329). ...read more.

The loss of Heseltine, Lawson and Howe led to the vote of no confidence that ended the Thatcher era. The Cabinet in this sense acts as a safeguard from damaging policies. Cabinet government, in theory, places power equally between the ministers. As so often in politics, theory does not always match the practice. Several factors have taken away the political equality of the Cabinet members. It could be said that the current Cabinet is only there to provide support for Tony Blair and it is in fact just the 'Big Four' of Blair, Brown, Prescott and Cook that wield any power. Burch (1990:102) identifies the role of the Cabinet being defined by current circumstances. He says that 'the key point about the machinery of Cabinet government is that it is highly flexible and it can be made to work in a variety of ways in accordance with the approach of this or that Prime Minister, the complexion of government that he or she leads, the nature of policy issues under consideration and the political circumstances at the time'. The shift away form Cabinet government suggest that there is not just one power centrw but a number of them (Burch 1990:108). ...read more.