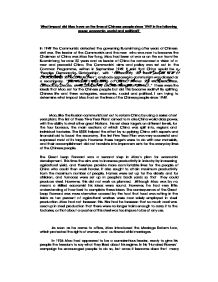 What impact did Mao have on the lives of Chinese people since 1949 in the following areas: economic, social and political?

What impact did Mao have on the lives of Chinese people since 1949 in the following areas: economic, social and political? In 1949 the Communists defeated the governing Kuomintang after years of Chinese civil war. The leader of the Communists and the man who was now to become the Chairman of China was Mao Tse-Tung. Mao had been at war or on the run from the Kuomintang for over 20 years and as leader of China he announced a vision of a new and peaceful China. The Communists' aims and policy was set out in the Common Programme, written in September 1949. It said that China would be a 'Peoples Democratic Dictatorship', with 'democracy for most people but a dictatorship for reactionaries'; anybody opposed to communism was classed as a reactionary. "The People's Republic of China strives for independence, democracy, peace, unity, prosperity and the strength of China..." these were the ideals that Mao set for the Chinese people but did this become reality? By splitting Chinese life and three categories, economic, social and political, I am trying to determine what impact Mao had on the lives of the Chinese people since 1949. Mao, like the Russian communists set out to reform China by using a series of set year plans. The first of these 'Five Year Plans' aimed to make China world class power, with the ability to rival other great Nations. ...read more.

Between 1959-62, 20 million people starved as a consequence of Mao's 'Great Leap Forward.' This shows that his skills as a leader surpassed his skills as a bureaucrat, and because of this many people died. For his crimes of 58-62 Mao was forced to step down as head of state in favour of a more liberal group - Liu Shaoqi, Zhou Enlai and Deng Xiaoping. In 1966, after four years of the 'Socialist Education Movement' (an attempt to re-divert public thinking back down the road of Maoist communism), Mao launched The Cultural Revolution. During this period large numbers of youthful zealots roamed the street of China's major cities, causing widespread lawlessness. The Cultural Revolution was a direct attempt by Mao to disrupt the control that the moderates had on China. It worked. Schools and collages remained closed for about a year. Leaving the Red Guards, as they were known, more time to humiliate 'reactionaries' and to read the thoughts of Mao. Many people began to idolise the party chairman. The leading moderates were removed from the party successfully, and Mao's task was accomplished. Many of the members of the Red Guards did not return to their schools though, instead 'going down to the country' as Mao recommended. This meant that by 1981, 120 million people in China were estimated to be illiterate. ...read more.

Deng had shown that he still supported some of Mao's ideas when he made clear that The CCP would still be the only party in China, he further showed his likeness to Mao in his ruthless suppression of the Democracy Wall movement in 1980. Freedom of Speech was removed from the constitution. Also, the 'One Child Policy' introduced in 1980 to curb the rise in population growth has it's Maoist flavours, as it puts the good of the collective above the desires of the individual. It was a necessary move, and one that Mao would probably have taken himself. In 1989 Deng's reforms were exposed as fallible. The capitalist problems of begging, unemployment, and reduced grain production due to cash cropping led to unrest among certain sections of the public. The Tiananmen Square incident showed Deng to be just as ruthless as Mao had been in keeping unwanted voices silent. To decide whether the Chinese people have been better off since the death of Mao you have to decide whether equality is more valuable to a nation than minority wealth. Since the death of Mao some people have enjoyed greater wealth and better education, but others have lost their jobs, or become poor compared to their neighbours. None have enjoyed greater freedom. In my opinion the Chinese people are not better off now than under Mao, as they have the worst of both worlds - the unemployment and stratification of capitalism, and the repression of communism. ...read more.