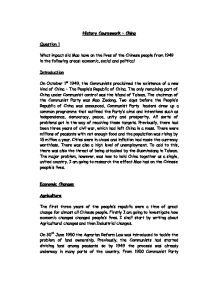 What impact did Mao have on the lives of the Chinese people from 1949 in the following areas: economic, social and political

History Coursework - China Question 1 What impact did Mao have on the lives of the Chinese people from 1949 in the following areas: economic, social and political Introduction On October 1st 1949, the Communists proclaimed the existence of a new kind of China - The People's Republic of China. The only remaining part of China under Communist control was the island of Taiwan. The chairman of the Communist Party was Mao Zedong. Two days before the People's Republic of China was announced, Communist Party leaders drew up a common programme that outlined the Party's aims and intentions such as independence, democracy, peace, unity and prosperity. All sorts of problems got in the way of reaching these targets. Previously, there had been three years of civil war, which had left China in a mess. There were millions of peasants with not enough food and the population was rising by 15 million a year. Cities were in chaos and inflation had made the currency worthless. There was also a high level of unemployment. To add to this, there was also the threat of being attacked by the Guomindang in Taiwan. The major problem, however, was how to hold China together as a single, united country. I am going to research the effect Mao had on the Chinese people's lives. Economic Changes Agriculture The first three years of the people's republic were a time of great change for almost all Chinese people. Firstly I am going to investigate how economic changes changed people's lives. I shall start by writing about Agricultural changes and then Industrial changes. On 30th June 1950 the Agrarian Reform Law was introduced to tackle the problem of land ownership. Previously, the Communists had started dividing land among peasants so by 1949 the process was already underway in many parts of the country. From 1950 Communist Party members travelled around the countryside teaching poor peasants how to work out the social class of the people in their community. ...read more.

Divorce by mutual consent was introduced and in February 1951, a further law was fixed where expectant mothers were given maternity benefit with full wages for two months after the child was born. All these changes were for the better and improved life for women greatly. China was now a fairer country to live in. In 1951, the Party started a 'thought reform'. It was called the 'Movement for the study of Mao Zedong's Thoughts'. It involved studying Mao Zedong's writings and self-criticism at Party meetings. This also applies to political changes. As well as 'Thought Reform', the Party organised mass campaigns and in 1951, the 'Three Antis Campaign' was launched against corruption, waste and too much 'red tape'. In 1952 the 'Five Antis Campaign was launched against bribery, tax evasion, fraud, theft of government property and spying. People who were caught committing these offences were sent to labour camps to be 're-educated' in reform. This was also included in the political changes. To strengthen the Party and China's social and political status further, the whole population was encouraged to join Party-run interest groups. Groups such as the Women's League for Democracy, the Young Pioneers and the China-Russia Friendship were set up all over China. Because the Communist Party ran these groups, it was easy for them to use the people for its own purposes such as mass rallies. An incredible example of this was when every Chinese citizen was asked to kill 10 flies a day throughout the 1960's. With a population of 600 million, flies became virtually extinct. In some areas. Another example of this was when cities were being cleaned up. In Shanghai, there was a campaign against rats and each week, every family had to produce one rat's tail. Another change that affected the Chinese people was the introduction of communes. This reorganised their lives. Families were split up into work teams where they shared everything. ...read more.

This was done by a group of moderate leaders; Head of State Liu Shaoqi, Prime Minister Zhou Enlai and Party Secretary Deng Xiaping. They introduced some realistic economic policies and in late 1960, they abandoned the Great Leap Forward. Communes were made smaller and peasants working in back-yard steel production were sent back to fields where they were allowed to own there own land and sell extra produce for their own profit. Town worker's wages were increased. This meant that a lot of Mao's work had been undone. Mao was given no say in running the country and the moderates controlled the economy. But, people regarded Mao Zedong as a revolutionary hero and he had a huge influence over the Chinese people. Although Mao was well intentioned, he spent a lot of time trying to reform yet most of his attempts seemed to backfire or go wrong. The two five year plans didn't exactly have the effect that Mao had hoped for, but they did boost the economy and morale. He went over the top trying to introduce Communist values leaving China in a state of more ruin than when he had come into power. Before he came into power, many had died due to war, but Mao managed to destroy the hope of millions. Many people died of starvation due to the lack of organisation at harvest time and generally throughout the year. He hadn't done much to help peasants and in some cases their living conditions became worse. Even the red guards when they reached the country realised that peasants lives in the country were a lot worse than their own in the cities. Due to the Cultural Revolution a whole generation had missed out on their education. During Mao's reign, the rich were stripped of their riches and intellectuals were ignored. Overall, Mao did not achieve what he had set out to do and his rule was a failure. As soon as a new leader emerged all the old values and ways were changed and the old China of Mao was left behind, but China remained Communist. ...read more.